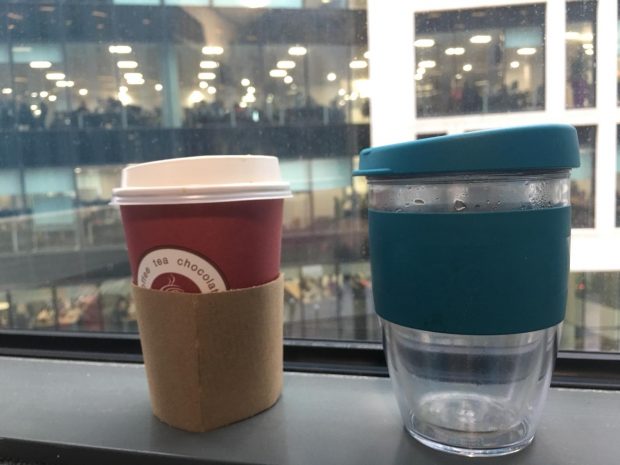 Almost 2,000 people have signed a petition started by Friends of the Earth Cymru to introduce a 25p tax on takeaway cups.

According to Friends of the Earth:

Catherine Price from Coffee Planet in Cardiff says “around 10 per cent” of her customers during the morning rush hour take up the discount that they offer for bringing a reusable mug, but thinks a 25p tax would put off some of her regular customers.

“When you’re only paying around £2.60 for a flat white and its a very small cup if you’re going to put 25p onto that…I think coffee shops are going to lose business.”

“There’s a fine line between being economically and ecologically responsible and actually being a business and trying to make money”.

Sean O’Donavan, who runs the Coffee Bike stall and regularly sells coffee in central Cardiff, told CJS News “a small percentage” of his customers bring a reusable mug, but that the number of people who did was “gradually growing”. Coffee Planet on Newport Road in Cardiff sells reusable mugs and offers a discount for customers who bring their own mug.

Environmental organisations have welcomed calls for a levy. In a statement the World Wildlife Federation Cymru said a latte levy would help tackle non-recyclable waste, ” is particularly damaging to our environment and wildlife.”

Friends of the Earth claim that a 25p charge for single-use cups, together with a system where cups can be returned to more cafes, would reduce these cups by around 30%.

The Paper Cup Association, which represents disposable cup manufacturers in the UK, said that paper cups are in fact one hundred per cent recyclable, and that they remain “the most sustainable and hygienic choice for take away drinks”.

It said the introduction of a charge for single-use cups would have a “disproportionate impact” on local jobs, including at the two main UK manufacturers of disposable cups which are located in Wales.

The UK government rejected proposals for such a charge in March 2018, concluding it wouldn’t reduce disposable cup usage.