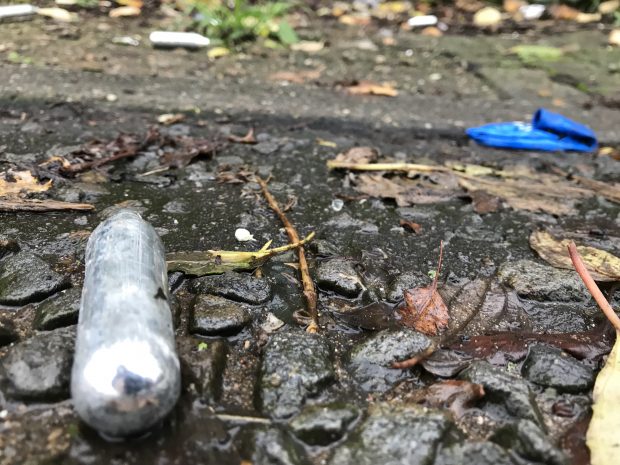 Keep Grangetown Tidy, who organise monthly litter picks in the area, said it regularly finds canisters of nitrous oxide and the balloons used to inhale the gas in parks and by the sides of roads.

According the drugs information service, Talk to Frank, nitrous oxide causes feelings of euphoria, hallucinations and fits of laughter by removing oxygen from the lungs but can also lead to unconsciousness and is potentially fatal.

The gas is used legally by medical professionals as an anesthetic and by the catering industry as an aerosol propellant found in whipped cream canisters.

Gareth Joseph, of drug charity Recovery Cymru, said: “The government weren’t able to prohibit nitrous oxide along with the other ‘legal highs’ because of its perfectly valid legitimate uses, and so it’s no surprise that its use has become very popular among a certain subculture of young people.”

He added that the drug is often used with other ‘party drugs’ such as cocaine and ecstasy to briefly enhance their effects.

Fiona McAllister, a volunteer with the community action group Keep Grangetown Tidy said they frequently find the canisters in “every street in Grangetown”.

She said: “I think people do it in cars a lot of the time and then they throw it all out of the car when they drive off so you often get it in spots where cars might park up at night where it’s dark.”

Ms McAllister added that Keep Grangetown Tidy have raised the issue with the police at previous Partnerships and Communities Together (PACT) meetings.

She said: “It would be good if the police had more resources and they could do something about it.”

South Wales Police have been approached for a comment.