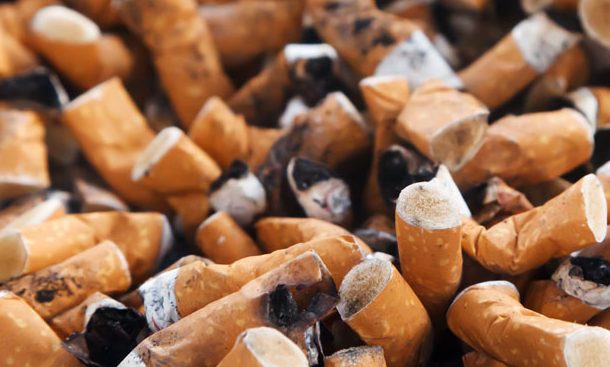 Littered cigarette butts were found on more than eighty percent of streets in Wales last year according to the anti-smoking organisation, ASH Wales.

They say more needs to be done to reduce the harmful effects of the litter smokers leave behind. According to the charity, birds and fish are mistaking the butts for food which is resulting in them being poisoned and killed.

This comes ahead of No Smoking Day 2019 tomorrow.

6 million cigarettes are smoked every day in Wales, but where do those cigarettes end up? 🌊🐬🐳🐠 We're raising awareness around cigarette litter this #NoSmokingDay2019 to engage young people and deter them from taking up the habit. @Keep_Wales_Tidy pic.twitter.com/VOGfcR26io

Diana Milne from the charity says people don’t understand the impact of dropping their cigarettes on the streets.

“Cigarette butts are the most littered item in the world. A lot of smokers don’t realise that cigarettes are not biodegradable. They contain plastic and they can stay in the environment for up to fifteen years.”

ASH Wales say the cigarettes release harmful chemicals into the water and contribute to the death of marine animals.

The charity says more than one hundred tonnes of smoking related litter is dropped every day in the UK.

People have taken to social media to discuss the issue, including academics.

By some measures, cigarette butts are a larger #pollution problem in the oceans than #plastic straws. Where's the health/enviro collaboration? https://t.co/YM9kvjn9Zl

They’ve teamed up with Keep Wales Tidy to raise awareness of the issue.

Keep Wales Tidy say the smoking litter has been found in the guts of marine wildlife around the country.

Nia Lloyd from the organisation says it’s a problem that could easily be solved.

“There are many things that can be done to improve the situation. We believe that raising awareness of the environmental impacts is key, along with education.”

Figures show there are fewer smokers in Wales than ever before but the charities say the number is still too high. More than 6 million cigarettes are smoked in Wales every day.

They say they hope No Smoking Day will raise awareness of the issue.