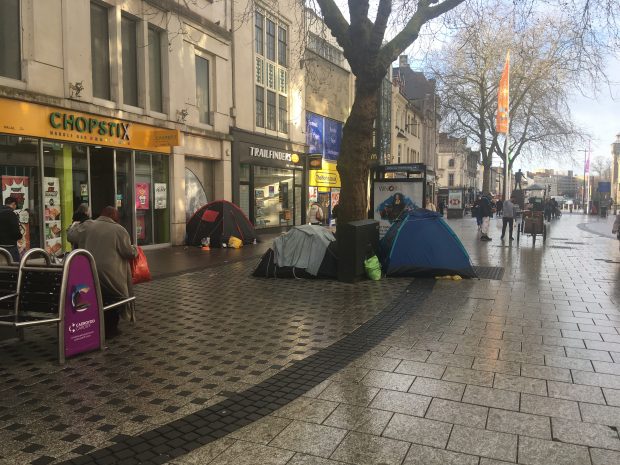 Cyncoed Cllr Kelloway tweeted a picture of herself in front of tents used by homeless people. In the tweet she called on Huw Thomas, leader of Cardiff Council, to tear the tents down.

It was posted the night before Shelter Cymru, the homelessness charity, released a report saying homelessness in Wales is at a crisis point. She’s been widely criticised for these comments.

Adam Johannes, the founder of the campaign group Cardiff People’s Assembly, said “for somebody who represents Cyncoed, one of the wealthiest areas of Cardiff, to be demonising people in this way . . . is quite disgusting”.

Councillor Kelloway has responded on Twitter and said her comments were made to raise awareness of the issue.

She also said there was no need for people to be in tents because there are enough beds in Cardiff for the homeless population.

But the Lib Dem Councillor for Pentwyn, Joe Carter, disagrees. He says the current accommodation system for rough sleepers “clearly doesn’t work for everyone”.

“Not everyone will feel comfortable in a shelter-type environment so we need to use more pods, more stand alone accommodation”. Cllr Carter also said Cllr Kelloway’s comments reflected badly on the city of Cardiff, “and made it seem like we have no compassion for the most vulnerable in our society”

Shelter Cymru have said they don’t know the exact number of homeless people in Wales but every homeless organisation has reported a rise in figures. They’ve also said more needs to be done and they want to see additional housing made available.