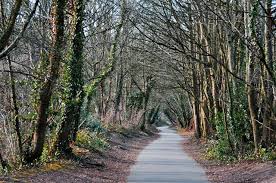 Cyclists and dog owners have clashed over use of the Taff Trail following reports of dogs causing chaos.

Cardiff cyclists say that dog owners who walk their pets off the lead are making cycling along the Taff Trail too dangerous.

They say the Highway Code states that dogs should be kept on a short lead on all shared pathways but nothing is being done to enforce this and dogs are out of control, often causing cyclists to swerve and brake sharply

Gwenda Owen, chair of Cycle City Cardiff, says a lot of dog owners don’t understand what it means to keep their pets under control. She says “We seem to have a situation now where dog owners are unable to call their dogs to heel.

“You’ve often got the dog one side of the path and the dog owner on the other and they’ll just call their dog across your path.

“So no matter how slow you’re going, you’re jeopardising your own safety and that of the dog.”

But dog owners say that cyclists are just as dangerous, cycling too fast, without lights or bells.

They say safety on the paths should be a shared responsibility and dog owners shouldn’t be the only ones forced to make changes.

Catrin Kean who walks her dog regularly on the trail feels cyclists should take responsibility too.

She says, “Cyclists need to respect us too, it is a shared path in a big city and we’re fighting for space here.”

Another dog owner, Natalie Jones, says, “It doesn’t make sense to use a multi-use space to go fast and then penalise the dogs. If they want to go fast they can use the roads”.

In a statement, Cardiff Council said it’s not their responsibility to enforce the Highway Code but they are committed to making the Taff Trail a safe shared space for everyone and are looking into ways of making this happen.