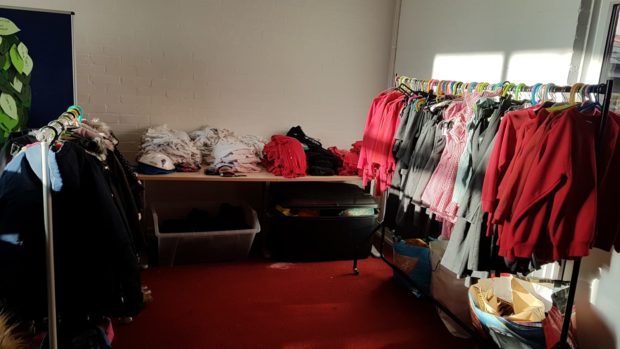 Parents in Rumney who are struggling with the cost of school uniforms are set to be helped out by a new charity clothing bank.

It has been set up for parents who are struggling to afford new uniforms for their children and has seen an increase in use following the Christmas holiday.

Staff at Rumney Primary School were becoming inundated by increasing amounts of donated school uniforms. With the help of the Parent Teacher Association, they decided to create what they describe as a “neutral space” where parents and carers can collect school uniform items free of charge, without risking embarrassment. Volunteers say that the hub, which is in the Old Library in Rumney, now known as the Rumney Forum, has seen great success.

Volunteers Kathryn Evans and Charlie Bailey said they have struggled themselves to buy uniforms for their children in the past and so were more than happy to give their time to help the parents in their community. Kathryn says, “We have seen lots of people coming in, we get a lot of locals but also people who have been placed here temporarily. It has been nice to help refugee families get settled into the community. Having it in the hub has been particularly helpful as people don’t feel like they are showing their children up by coming here for help.”

The Friends of Rumney Primary School have struggled to give the scheme a name as it is not really a swap-shop, as there is no need to bring anything to swap. It has encouraged people in the community to give new life to items their children have out-grown. Volunteers say as children grow so quickly, lots of the items have barely been worn and all of them are in very good condition. Volunteers have also commented on how the hub prevents perfectly good “pre-loved” clothes going to landfill and encourages people to re-use and recycle.