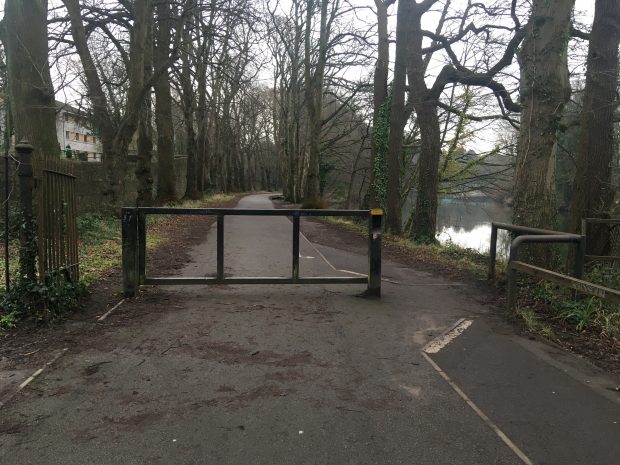 Cyclists in Cardiff say a gate on the Taff Trail is putting people at risk.

The gate is near Blackweir Bridge and cuts across the path. It only leaves a small space for pedestrians and cyclists to pass through and a number of cyclists say they have been injured trying to cycle through the space.

Cyclist Stephen Cunnah regularly uses the path and he says the gate and the ground around it is “hazardous”. He’s particularly concerned about the risk cyclists face when they try to cycle through the space at night, when it’s dark.

Cardiff Council say the gate is there to stop vehicles from driving onto the trail. But Mr Cunnah says there are other access points on the trail where a gate could be put to stop cars without blocking the trail itself. He’s also said that the council should consider replacing the gate with bollards.

Pedal Power, the cycling charity, also want to see bollards instead of a gate on the Taff Trail. They say the gate is stopping disabled cyclists from accessing the trail because the space is too small for some adaptive bikes to get through.

Mr Rahmen-Dahltry says that when the adaptive cyclists can fit through the gate is still a problem because “the riders don’t feel confident and comfortable enough to go through those gaps. A lot of cyclists that come and see us (Pedal Power) have spacial awareness disorders like dyspraxia and those people . . . won’t even try to go through the gate”.

The council have said they’ve spoken to the Parks department who will be looking into the issue.