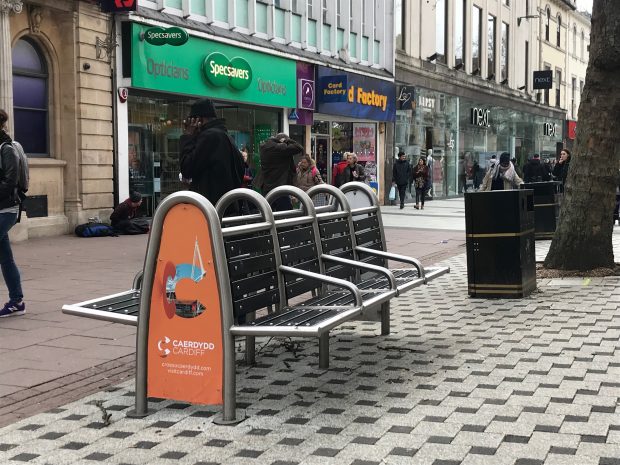 Welsh AMs say architecture designed to stop homeless people from lying down should have planning permission.

The Welsh Assembly Petitions Committee discussed the structures at the Senedd earlier today and decided to call for new planning regulations.

It follows a petition from the organisation People Over Profit, which received 120 signatures, and called for hostile architecture to be banned.

Hostile architecture is the term given to structures or public spaces that make it more difficult for people to sleep rough. Examples include spikes or studs in shop doorways, loud music or armrests on public benches.

During the meeting AMs said that they didn’t think it was a massive problem in Wales. But, they agreed it should be subject to planning regulations after UKIP AM, David J Rowlands, said the Assembly should “take a proactive view.”

The majority of the benches on Queen Street in Cardiff city centre have armrests – falling under the definition of so-called hostile architecture. 38 year old Raymond Wilks has been sleeping rough for almost twenty years and says he doesn’t blame shop owners for using devices such as spikes, “At the end of the day they’re trying to protect their business. I can see it from their point of view.”

“They don’t want to come in in the morning and see people sleeping outside.”

But the proposals were welcomed by homeless charity, Shelter Cymru. They told CJS News, “The growing use of hostile architecture such as spikes, armrests in the middle of benches and railings to prevent people who are homeless from being able to lie down or sit in certain spaces chimes with a wider increasing intolerance of people sleeping rough.

“It sends a message to people who are vulnerable and in desperate situations that they are not wanted.

“We welcome the proposal to include this issue as a planning matter.”

The Petitions Committee will be submitting plans to make hostile architecture subject to planning regulations in the future. It will be reviewed by the Housing Minister.