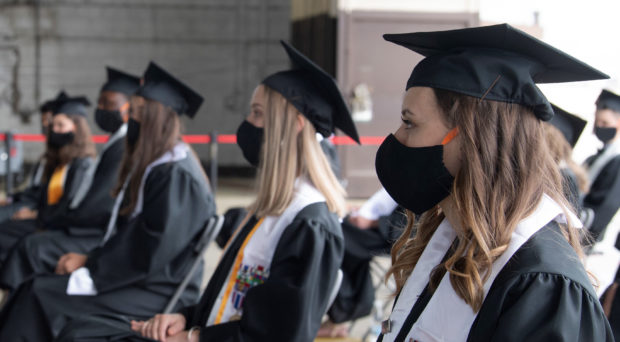 Some university students face impossible choices due to COVID-19 hardship according to the National Union of Students (NUS) Wales.

It comes as the Welsh Government faces calls to provide funds for students who are unemployed due to the pandemic – the only UK government yet to have done so.

According to an NUS Survey, almost half of students who work have seen their income reduced because of coronavirus, with 78% of all students concerned about their ability to manage financially.

Rutendo Dafana has only been able to pay three-quarters of their rent since being furloughed from their bar job in March.

“Being a zero-hour contract worker my hours are very varied throughout the year. Right now was meant to be the busy season so in reality I’m making about 40% of what I would during normal summer,” they said.

“A lot of the focus has been on universal credit and as students you don’t have access to that. I’ve just been watching everyone else being sorted but [they’re] leaving out a key demographic.”

Jasneet Samrai who starts at Aberystwyth University this September also feels left out.

“We’ve had the furlough scheme and self-employed scheme which obviously benefit adults, but we don’t really see much for students, especially considering students are the most likely to be laid off in this crisis,” she said.

As her student finance will only just cover rent, she expected to find a job when she moves to Aberystwyth. But with student-heavy sectors such as retail and hospitality amongst the hardest hit by coronavirus, it looks less likely.

“I’m quite worried in terms of how it will all pan out. I’m going in not knowing what financial situation I’ll be in which is just anxiety for me.”

Before lockdown Will had three zero-hour jobs that he wasn’t furloughed for – receptionist, student ambassador, and a teacher at a kids club. Some weeks he would only earn £20 but even that “would have been amazing in these circumstances” he says.

“I can’t return to my father’s house as he and my grandparents are all high risk. I’ve been in halls for months now by myself, paying for rent and food without any other income which is starting to worry me a lot.”

Many students rely on their parents for financial support, but according to NUS Wales almost half say that the income of someone who supports them has been impacted by COVID-19.

“Some students are lucky enough to have parents that support them through university, but obviously if those parents are on furlough, have lost their jobs, or have reduced hours, even just one parent…” said NUS Wales President Becky Ricketts.

“Then you get students who are from care backgrounds, are carers themselves, are international, are from single-parent families… these are going to be some of the hardest hit.”

“There are choices between heating and eating for some students. There are some that will choose the cheapest accomodation because it’s that or not go to university.”

The governments of Scotland and Northern Ireland have provided an additional £16.4m and £2.8m respectively for universities to support students who are struggling financially. In May, the UK government announced that universities in England could use funds of £23m a month to boost hardship funds.

UPDATE: On the 22nd July the Welsh Government announced £27m for universities, some of which can be used for student hardship funds. Reacting, NUS Wales President Becky Ricketts said “It’s disappointing that this package does not include ring-fenced funding for student hardship, demand for which has increased during the pandemic and will only worsen in the coming months.”