The Football Association of Wales has announced its plan to have 20,000 girls playing by 2024, but what needs to change for this goal to be achieved?

Megan Rapinoe. Ellen White. Sam Kerr. Before the summer of 2019, there was very little chance you’d have heard these names. But with the 2019 World Cup came the opportunity to elevate women’s football to a whole new level, and to provide millions of young women all over the globe with talented, passionate role models.

Young girls in England have already been inspired by the Lionesses, with reports surfacing that interest and participation in girls’ football is already on the rise over the Severn Bridge. But as Wales were sadly knocked out of the World Cup qualifying stages, it’s imperative that the Football Association of Wales (FAW) find new and exciting ways to drum up interest for girls’ football.

There are currently around 6,500 girls and women playing football in Wales, but the FAW has recently revealed their plan to increase this number to 20,000 by 2024. “We’re launching new girls’ programmes aimed at girls aged five to twelve,” says Katy Evans from FAW Trust. “As there are typically fewer opportunities for girls to play football than boys, we need to do more to ensure that young girls across Wales have that opportunity to build a connection with the sport from an early age.”

Despite events like the 2019 World Cup, women’s sports still only account for around 7% of total sports coverage in the media. The FAW work hard to attract new players to the girls’ game,  but perhaps it’s the national media who need to change their tactics when it comes to encouraging female participation. “Events like the Women’s World Cup are amazing, because you don’t usually see women’s football on television.” says Nanw, who plays for Thornhill Girls FC. “But programmes like S4C’s Sgorio, which shows Welsh Cup matches and games from the lower leagues, could do more to show women’s football too, because we need to see talent on all levels.”

Not only are women footballers underrepresented in the media, but there is a severe lack of female representation in the sports journalism industry. Around half of national newspaper sports desks have no women, and only 1.8% of sports articles in 2016 were written by female journalists. “Although the FAW treats the women’s senior team, at least in media terms, on a par with the men’s team,” says former Wales captain, Professor Laura McAllister, “We’ve still got a long way to go with regards to media attention.”

We just don’t have enough women working in the field of sports journalism to make a real difference, which is part of the reason the women’s game gets less attention.

The media certainly play an integral part in inspiring young girls to don their football boots, but it’s often the opportunity to play football in school that sparks young girls’ interest in the sport. Although 93% of schoolgirls believe that football isn’t just for boys, around half of UK girls won’t have played football in their PE lessons. “We only played football for one half term this year,” says Elen from Fairwater Girls FC. “But we aren’t allowed to do anything with the boys – we do a lot more of the ‘girls’ sports’ like netball and hockey.”

This lack of variety in girls’ PE lessons was highlighted in the National Assembly for Wales’ Physical Activity of Children and Young People Report. There is a distinct lack of opportunity for girls to engage in a broad range of activities in PE lessons, with the Welsh Assembly noting that PE teachers mostly offered a traditional games programme for girls, which did not include football, rugby, or any more traditionally masculine sports.

These traditional games programmes often result in the sex-segregation of sports in schools – just another obstacle facing aspiring female footballers. In 2014, the UK government released a report advising schools to ensure equal opportunities for girls to participate in male-dominated sports like football, it seems that not every school in Wales is following these guidelines. “None of the girls who play on my team have played football in school this year,” says Nanw. “We train with Thornhill once a week, but if we had just a few football sessions a month in school, I think it’d really help us develop our skills, and maybe encourage more girls to join the team.”

This sex-segregation of sports in Welsh schools has been condemned by the Children’s Commissioner for Wales, who said that such practice would ‘turn young girls off’ from sports and exercise deemed traditionally masculine. Having sex-segregated sports in schools can be frustrating not only for established female footballers, but for girls who want to try out football for the first time.  “Because we’ve been playing netball in PE all year and not football, plenty of the girls have a good standard of skills for netball,” says Mali. “The teachers are reluctant to give us football sessions because fewer girls know how to play football, and they think that means that they’re not interested, which isn’t true at all.”

Many of the reasons given as to why schools aren’t offering football in girls’ PE lessons come down to lack of experience or training from female sports teachers. “We don’t have any outside help really.” said one secondary PE teacher in a recent SportWales report. “On the boys’ side, there is one other member of staff who helps with clubs and fixtures, which is good. I’m not saying staff aren’t supportive but there’s nobody to run clubs outside of the department on the girls’ side.”

The lack of training afforded to sports teachers was highlighted in a recent report by the House of Commons Media and Sport Committee. The report called for fairer allocation of funds for girls’ sporting activities in schools, focusing on teachers’ training specifically. “As a female PE teacher myself,” says Carys from Cymric FC. “I understand that not everyone in my position has experience playing ‘manly’ sports like football. But we have to be ready to learn – training is so sparse, but when it is available, we have to take that opportunity so that we don’t let down the girls in our schools who are desperate to play football.”

The lack of provisions for girls’ football in schools is only one reason that 55% of secondary schoolgirls do not enjoy their PE lessons in Wales. The Welsh Assembly reported that a lack of role models for girls was also affecting their desire to play football. For some, this means seeing players like Jess Fishlock on their screens, but for others, it’s teachers and coaches that provide this inspiration.

Having supportive coaches is crucial for young girls to feel confident in their abilities, whether that be in PE lessons, or at club training sessions. Chris Hooper has been coaching the Cardiff Bluebelles Ladies Development squad for three years. The team consists of women of all ages – some haven’t played since they were children, some have a little experience, and some are trying it out for the very first time. “Although I’m one of two male coaches at a women’s football team,” says Chris, “We understand that women may need that little bit more encouragement, but not just from us, from the rest of the team.”

The team are currently busy preparing for the new season, which entails intense cardio exercises that aren’t dissimilar to assault courses. Some of the players are whizzing through the course, and some take it a little slower, but the team communicates with each other throughout, motivating each other. “In team exercises where it’s a bit like a race,” says Chris, “We always make sure that the team encourages that player who’s in last place, who’s perhaps new or playing at more of a beginner level, so that they don’t lose confidence.”

Although a lot of male coaches are aware of their female players’ needs, it still remains important for female players have female mentors. The Football Association of Wales (FAW) are emphasizing the need for female coaches, as for young girls especially, having role models with which they can identity is crucial for development. “Men do play an important role in the female game,” says Katy Evans from the FAW, “as they can help challenge the stereotypes and encourage a positive attitude towards the female game.

Having a female coach is so important for young girls so that they have someone to look up to who’s challenging the same stereotypes they are.

Not only are the FAW providing more programmes for female coaches, but last year, FIFA launched its Coach Mentorship Programme, designed to support female coaches by enabling them to harness new skills and to develop their careers. As 100% of male athletes have been coached by male mentors at some point during their careers, it only makes sense that the same right is afforded to female athletes, especially in typically masculine fields. Female mentors in football are crucial for female empowerment and to encourage the sport’s growth, and by training more and more new female coaches, both FIFA and the FAW hope that girls’ football will see an incredible boost.

However, although football organisations like the FAW are working hard to create programmes for female players and coaches, it seems there’s still more that needs to be done to really boost female football participation. On Welsh sports governing bodies, only 25% of Chief Executives are women, with women making up only 32% of senior leadership roles. Female representation at the higher levels of the football industry certainly needs to improve if the FAW is to reach its target by 2024.  “We need a lot of governance to make sure that women are scrutinizing the process along the way,” says Professor Laura McAllister.

I know from experience that if there aren’t enough women on governing bodies or in any environment where decisions are made, the chances are women’s sport will take a backseat.

Redressing the gender imbalance in sporting leadership roles will be no mean feat, as 72% of men working in sport believe that no such imbalance exists. “Obviously, this is a problem that goes beyond football, and beyond sport altogether,” says Lucy Pepper from Women in Football. “It’s a societal issue, but we need to be educating those in the football industry – male and female – of the gender imbalance that exists within it. We need to keep lobbying those who work higher up in football to keep it on the agenda.”

The FAW’s target of 20,000 female players will require a great deal of work, as they attempt to inspire real change within the football community. For young girls like Nanw, Mali and Elen to realise their dreams of being the most-talked-about players of the 2027 World Cup, organisations like the FAW will have to ensure that elevating the girls’ game is their top priority. “We’re forging ahead in the women’s game,” says McAllister, “But we know we’ve got more to do. We’ve got to be ambitious and we’ve got to be aspirational and really make sure that women are the ones driving progress in the game ourselves.” 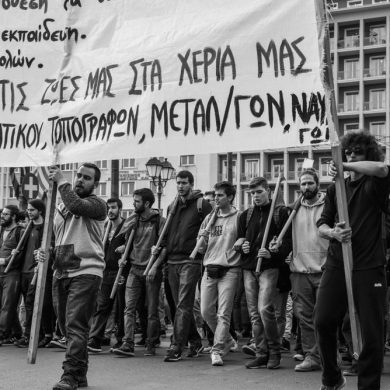 Is politics the heart of the Greek universities?