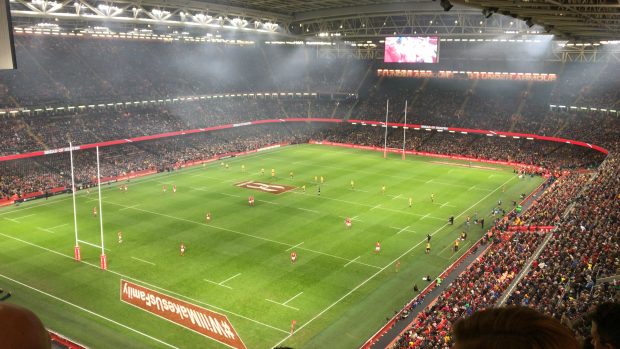 An estimated 275,000 rugby fans will flood into Cardiff this weekend to see if Wales can pull-off a Grand Slam victory against Ireland.

The match kicks-off at 2pm with the Principality at full capacity and a further 200,000 people estimated to be watching in venues around the city.

Wales are on their greatest ever winning streak and a further win would crown them Six Nations Champions. However, Ireland hope to derail Wales’s success, as they can still snatch the championship after winning a bonus point against France. After Scott Williams was brought-off during last Saturday’s clash with Scotland, he’s been an injury doubt. He’s since been confirmed at number 15 in the starting lineup.

But this weekend’s match is fresh with new controversy, as Ireland have forced Wales to keep the roof of the Principality Stadium open during the Grand Slam decider. Wales wanted to keep the roof shut after complaining that the pitch was too wet during their last match.

There are two weather warnings in place for Wales on Saturday, including heavy rain and strong winds. It may be unpleasant inside the stadium, but fans are warned that golfing umbrellas are strictly banned under the stadium’s enhanced security. Fans should also plan travel arrangements ahead of time due to the bad weather and sheer volume of fans.

“WRU should cut the choir and the band during the anthem on Saturday” – some Welsh rugby fans say the choir and band who perform at the Principality Stadium on match days drown out the sound of the crowd and the atmosphere would be better without them.

The Secretary for Pendyrus Male Choir says: “I think it’s disgusting really. I think if they got rid of choirs you’d lose all the entertainment. The Welsh people wouldn’t have it.”

But Matt Southcombe, a Welsh rugby fan thinks the choir should be cut halfway through the anthem to let the fans finish it off. He said, “They do it at Murrayfield in Scotland and it really does make for a brilliant and incredible atmosphere.”

Cardiff Council, Transport for Wales and other transport companies have also issued advice for those travelling to Cardiff for the match. There will be a lot of travel disruption in the city, including:

You can read our in-depth Six Nations Transport Guide so you can plan your way home.

The Principality Stadium have the following key security rules for fans entering the stadium: