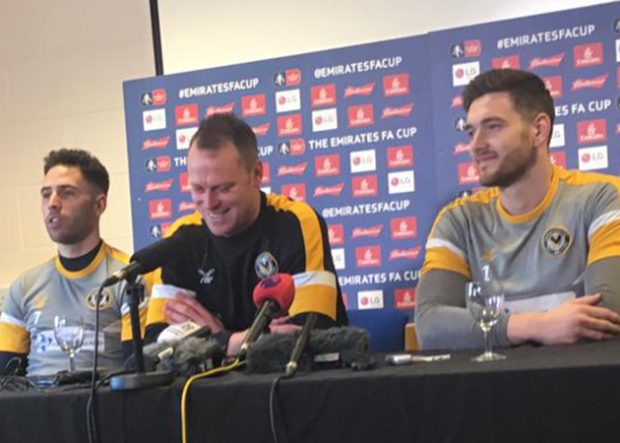 Excitement is mounting as Newport County gear up to play one of the biggest matches in the club’s history.

The League Two side host top of the Premier League Manchester City in the FA Cup in front of a sell-out Rodney Parade crowd tomorrow.

Newport manager Michael Flynn says he’s “never hid the fact” he is ambitious and wants to take on other teams in top-flight clubs.

“I’m a young manager, I want to be testing myself against the Pep Guardiolas and the Tony Pulises of the world on a more regular basis,” Flynn said on Friday.

He added that the opportunity to put his side up against the likes of sides managed by Manchester City’s Guardiola and Middlesbrough’s Pulis, was ‘huge’.

He added: “I can’t explain what it feels like or what it means because it is too hard to put into words. It’s a massive, proud occasion for me, my family and the whole football club.” It’s only the second time in the club’s history they have reached the last 16 in the fifth round of the competition. The last time they reached this stage was in 1949.

According to the Press Association the total transfer value of Newport County AFC players is around £50,000 compared to Manchester City’s most recent starting line up worth £465m .

Newport’s Padraig Almond will lead his side’s forward line and hopes to maintain his record of scoring in every FA cup round this season.