Local businesses say the Maelfa regeneration project in Llanedeyrn is losing them money.

The re-development of the Maelfa shopping centre has been going on since March and it is not scheduled to finish until 2020. The regeneration project will see nine new shops being built, off-street parking, pedestrian crossings and public spaces, as well as fifty four affordable houses and apartments. Negotiations are still on-going on what shops will transfer over to the new site.

Shop owners in the existing Maelfa shopping centre say the construction work is blocking access, with many customers thinking they are closed for business. The shops have moved to the front of the building to make it clear the are open.

Some of the shortcuts that were previously used by locals to access the shops have now been closed due to the building work. Instead, people are choosing to catch the bus and to do their shopping in the town centre.

Dharmesh Patel, owner of Jay’s News says business has been a struggle since the development started. Less people are buying lottery tickets and that he is counting down the time until the re-development is complete. He says: “A lot of people are saying Maelfa is closed and that it will re-open when the new shopping center is built”.

Cardiff council says they have offered shop owners reduced rent to help businesses with any disruption caused. They are working closely with tenants to ensure they can remain open throughout the development process.

But Lib Dem Councillor for Pentwyn, Emma Sandrey, says the council need to do more publicity to make people aware that the shops are open for business.

The opticians, fish and chips shop, pharmacy, hairdresser, butchers and many more businesses are still up and running, but due to the lack of awareness and signage people assume they have closed down.

Ms Sandrey says on top of issues with access – parking is also contributing to loss of business. Construction workers are taking up limited car park space, where customers would usually park.

She says: “It makes me really sad, we want to keep the local businesses and if they are not able to succeed in this transition process, it’s likely they won’t stick around”. 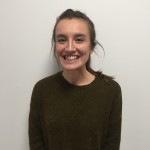