Meet the refugees giving Splott a taste of home 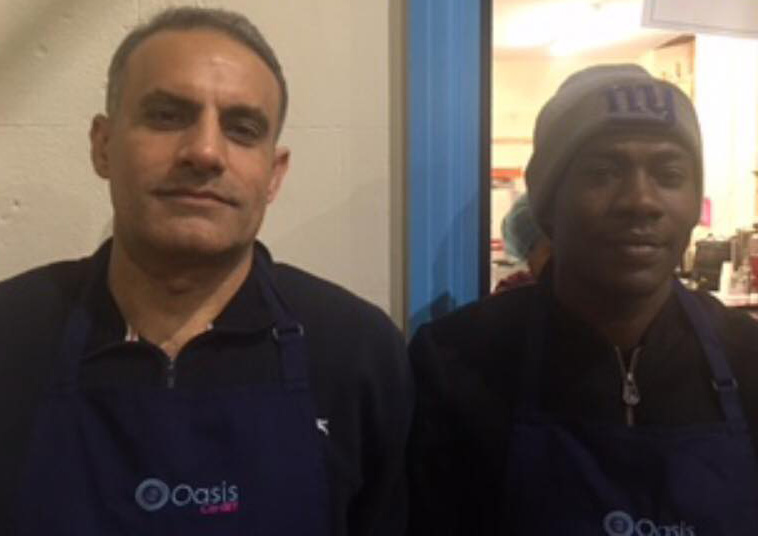 Mohammed and Hafiz both volunteer in the Oasis Centre’s Mobile Street Food Kitchen, in the centre of Splott.

Mohammed Robaie, 42 is a refugee from Iran – since coming to Cardiff in 2008 he has found solace in sharing his experience of cooking traditional Iranian dishes in the Oasis kitchen.

Hafiz Osman, 21, is a young asylum-seeker who fled Sudan over a year ago. Just like Mohammed, Hafiz has a strong desire to share the knowledge of his home cuisine of traditional Sudanese food.

Both are taking part in a programme, run by the Oasis Centre, that helps asylum-seekers gain refugee status and the right to work. The centre offers free English language courses alongside a chance to take part in the mobile street-food kitchen.

Oasis cannot pay those involved in the programme, because the law doesn’t allow asylum-seekers to be in paid employment. The Street-Food programme helps them gain experience in a kitchen environment and showcase their food heritage. The skills gained here will help both Mohammed and Hafiz gain work in the future.

The centre is situated inside a renovated church building. Inside people are being ushered into a large, brightly lit hall which is laid out with tables for customers. On the left of the hall the chefs are serving Iranian, Sudanese and Albanian foods.

A drum group enters from a side door and sits in front of the tables. The room quietens, as the group leader begins beating a drum in the centre of the group, before long the room bursts into a raucous energy.

The atmosphere begins to liven with a mixture of African drums and international foods making for a vibrant evening. In a backroom, Mohammed and Hafiz begin joking about the Cardiff weather.

“I came to Cardiff in January 2008, over 10 years ago now – the people here have been very nice from the start, and the weather is great all year.” Mohammed said laughing, as he settles back into his chair.

“I have never liked the weather since I first came here a year ago, even though I have enjoyed Cardiff in that time – it is always so cold and rainy – back home in Sudan there is always sun.

“I remember on one of my first days here in Cardiff I wanted to go shopping – but no, the weather was so cold I just couldn’t do it.” Hafiz said smiling.

Hafiz begins to talk excitedly about his time working in the Oasis kitchen as he leans forward in his chair: “Before I came to Oasis, I did not know how to cook very well but now I’ve started to learn how to cook in new ways and how to prepare food in the evenings for everyone who comes here to try these dishes we make.

“From working in the kitchen, I have been able to meet new people and people with different cultures from me – it’s really exciting to be able to do this.”

Hafiz has a sense of energy about him as he recalls the foods he ate when back in Sudan.

“I did not have this experience of being in a kitchen back home or the skills to cook but I remember the foods that we ate.

“Last night we cooked Sudanese food: Gheema, which is a mix of meat, potatoes and spices; Mullah, a stew of meat mixed with Okra – a vegetable popular in Africa.

“We also made Kisra – a flatbread which is made in Sudan which everybody loved.”

Hafiz talks about these foods with enthusiasm and his ability to share them with people who come to the evening here at Oasis – as he sinks back into his chair with his hands crossed.

Mohammed recollects his experience in the kitchen: “I came to Cardiff about 10 years ago, but I started working here at Oasis last year and began learning in the kitchen.”

“I started showing people how to make Iranian food, as well as working with other people’s food such as Sudanese dishes with Hafiz.

Mohammed begins to explain Iranian food further and how on a previous evening in Oasis he, alongside the rest of the kitchen, cooked a formal meal with notable Iranian dishes on the menu.

“Iranian food has lots of things to it: different rices, chicken mixed with saffron, kebabs, but on this night, I taught people working here how to make a Kuku Sabzi omelette.

“A Sabzi omelette is a traditional dish made from eggs and fresh herbs with different spices such as cinnamon in there or fruit like cranberries.” Mohammed adds as the music suddenly quietens down in the main hall for a quick respite before crashing back into life a few moments later.

Alongside these two men, Matt Davenport, 27, oversees the kitchen when it is open for its street-food nights.

He explains the extent to which Oasis goes in order to provide authentic food from the people who work in there and to get them the much-needed experience to go on to work in kitchens after this.

“I’m the catering manager here and I provide training and give a platform for those that get involved with the kitchen.

“We serve up to 115 plates during the day for those that access the centre here and help those who volunteer in the kitchen take it that little bit further, by giving them those professional skills to work in a kitchen after this.

“They bring their recipes to the kitchen that are part of their food heritage and try to make them commercially viable and presentable in a street food environment.

He then begins to reflect on what made him begin working at the Oasis centre and what it has taught him meeting people from a variety of cultures and backgrounds.

“Until I started working with Oasis, I only knew of the Refugee Crisis through mainstream media outlets. Until you talk to the people that come to Oasis you never really understand them as people – you just see them through labels such as ‘refugee’ or ‘asylum seeker’.

In the backroom Mohammed and Hafiz sit back in their chairs where Mohammed shares a joke when asked about his age.

“How old am I? I’m 21 – can you not tell?” They both share a laugh together before Hafiz talks about his experience of living in Cardiff and finding Oasis.

“I found Oasis through a friend of mine – and now I love it, the experience of helping people who come here and learning to cook is what made me stay– I want to share my experience with new people who to Oasis.

“I am an asylum seeker, but I just want to help others – that is what is important to me, helping others through what I have learnt, and it is why I will stay in Cardiff.” Hafiz adds as he looks towards Mohammed for some final words when asked if he will stay here too.

“Of course,” He quips, a smile cutting across his face as both men stand up to leave the room to join the rhythmic sounds of syncopated drums and delicate aromas of food in the main hall.