The Tardis lands in Queen Street for Doctor Who filming

Hundreds of fans gathered in central Cardiff this morning to watch the filming for the new series of Doctor Who.

Despite freezing temperatures and heavy rain, locals crowded round the Tardis in the middle of Queen Street to catch a glimpse of the new Doctor, Peter Capaldi.

The Tardis lands in Queen Street

Both Capaldi and Jenna-Louise Coleman, who plays the Doctor’s assistant Clara Oswald, have been filming in Cardiff for the new series since the beginning of January.

Coleman was spotted stepping out of the Tardis and calling someone on her phone.

Capaldi was also seen leaving the Doctor’s blue phone box and joined his companion to share an awkward hug.

As the two walked away, Capaldi’s Doctor was heard saying: “Chips. I fancy chips.”

The cast sheltered from the rain in a Specsavers during breaks in filming.

Unsurprisingly, considering the show’s popularity, hoards of fans waited around for a glimpse of the stars.

College students Poppy Smith and Georgia O’Donovan, both 16 and from Cardiff, braved the bad weather to see the filming of their favourite TV show.

Dr Who fans watching filming for the new series

Miss O’Donovan said: “I was going to college and my friend knows I’m a Whovian – which is a Doctor Who fan – and she texted me to come.

“I’m currently an hour and a half late for college, but it’s worth it!”

“I thought he was going to be quite whimsical, which wouldn’t have worked because he’s Peter Capaldi and he doesn’t work like that.

“I prefer the chemistry between Capaldi and Clara at the moment.”

Miss Smith said: “I think it’s going to be more like a father-daughter relationship more than anything, which I’m going to love.

Doctor Who will be returning to our screens in the Autumn.

Listen to an interview with Poppy and Georgina: 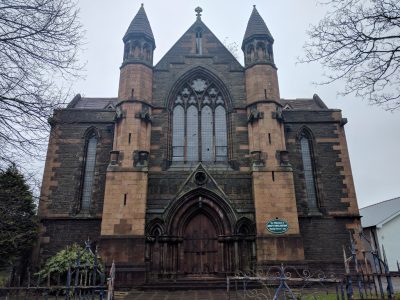 Flats to be built at Grangetown’s Dr Who church
Historic Doctor Who church may be saved by homes for elderly plan
National Tourism Week: Top 10 tourist attractions in Cardiff
Ten places to take your Mam this mothers day.
About Post Author