Saleem Kidwai, Secretary of the Muslim Council of Wales, hit out against the second reading of the Face Covering Prohibition bill today.

The bill, introduced to Parliament by Conservative MP Phillip Hollobone, has created debate within and outside the Muslim community since its first reading on 23 June 2013.

Mr Kidwai, who has been Secretary of the Muslim Council of Wales since 2010, said: “We have been opposing this bill since Phillip Hollobone first presented it last year.

“If you put the issue of religion to one side, then the matter just comes down to basic human rights over what an individual wants to wear. That is almost more important than religion.”

The Face Covering Prohibition bill would make it illegal for any person wearing a garment or other object intended by the wearer as its primary purpose to obscure the face in public.

Mr Hollobone, who debated the bill with around 11 other MPs in the House of Commons today, argued there was an issue of national security issues around full-face veils.

He said: “I am outraged that anyone could be waved through passport control at an airport without having to show their face.”

Mr Kidwai, who also serves on the board for Cardiff University’s Centre for the Study of Islam added: “We know there are worries around the issue of women who wear full dress in airports but the problem gets blown out of proportion.

“Women, when asked to remove their veil to reveal their identification at airports are happy to do it. In my experience they have no objection at all to doing this.”

The debate in the House of Commons also criticised Mr Hollobone for implying Muslim women wearing the burqa need to be rescued in order to become fully integrated into British society.

Hitting back at the MP for Kettering, Mr Kidwai said: “It’s actually a minority of women who wear this, and there’s a misconception that they are forced to. I do not agree with forcing any women to wear a burqa, but if they choose to do so that is their right.”

Cardiff resident, Iestyn Evans said: “Sometimes they can be a little intimidating, especially in dark times as well, but it is their religion. I think they should lose the veils if they are coming to another country.”

Another resident, Peter Dyer, said it was down to personal choice.

“Everyone has the right to wear what they want, it’s their own personal choice and people should be able to express their own religious identity,” he said.

The Face Covering Prohibition bill will be debated again in the House of Commons on May 16. 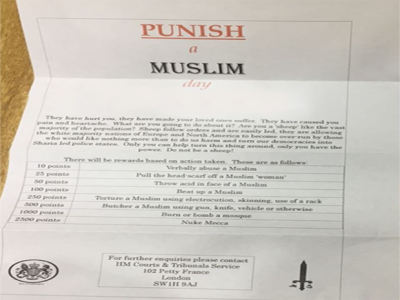