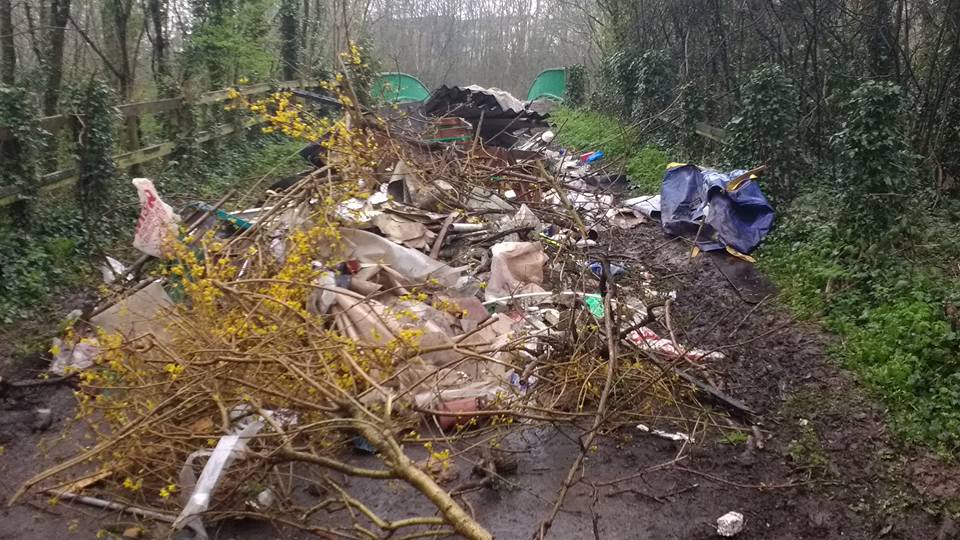 Fly tipping feared to contain asbestos on the Rhymney Trail

RESIDENTS in Pontprennau have expressed concern over fly tipping thought to contain asbestos on an access bridge over the A48.

A lorry’s worth of rubbish was dumped on land by the Rhymney Trail after Cardiff Council allegedly failed to lock a gate after clearing the area of previous rubbish.

The waste, which includes construction material thought to come from a garage roof, was first noted by residents on Saturday morning.

It has been alleged the incident happened last Thursday, when a gate preventing vehicle access to the land was left open after a council clear-up of previous litter.

The incident has since been reported to local authorities with tape now cordoning the area off. A spokesperson for Cardiff Council has stated it is unable to comment on an active investigation.

Despite this Liberal Democrat councillor for Pentwyn Judith Woodman confirmed that while the council is aware of the situation wet conditions have prevented any vehicles from accessing the site.

“I know the council are on the case but they did have a problem with their vehicle going through as the ground was wet,” she said.

Concerns have now been raised over the content of the rubbish.

“People dump rubbish in that area but this one is particularly toxic as it may contain asbestos. It could cause damage to the area and people. ” said Robert Lee, 65, from Pontprennau.

“They’ve blocked the whole highway there so if any emergency services needed to get through if there was a grass fire they couldn’t.

“The gate was left open on Thursday so it must have been dumped later that night.”

According to Mr Lee the area has been targeted for fly tipping in previous years, with construction waste previous found in nearby woodlands.

“Builders have to have a licence to take things to the dump and it costs. They go to dump it down there because they don’t have to pay,” he said.

Located between the wards of Pontprennau, Pentwyn and Llanrumney, the Rhymney trail has been described as a popular shortcut for residents.

“It’s a very popular place for walking dogs. It’s a popular shortcut from Pentwyn to Llanrumney it’s not a muddy track, it’s tarmacked and being maintained by the council,” said Kevin Russell, 57, from Pontprennau.

“The ironic thing is you can’t put a tape around it and tell people not to use it, It’s a main thoroughfare between Pentrwyn and Llanrumney

“A lorry has got in there, you can see it’s a lorry from where the tyre tracks have gone over the bridge.

Despite the claims, one Pentwyn Councillor reassured the Cardiffian of the safety of passers-by.

“Even if there was asbestos, unless you tamper with it or go rummaging through it then you expect the danger to people walking by to be fairly minimal,” said Liberal Democrat councillor for Pentwyn Joseph Carter.

However Coun Carter acknowledged the wider problem of the dangers caused by fly-tipping in the area.

“With any building material it could have a dangerous effect on wildlife nearby or people who go close by generally,” he said.

“Certainly if the gate was left open by the council this is very concerning. From time to time here are issues where park officers have inadvertently left the gate open and someone has gone across to a site that they shouldn’t.

“Fly tipping has become a real problem across Pentwyn, particularly in woodland areas, which the council is taking very seriously.”