My friend Mike – lost in the asylum system 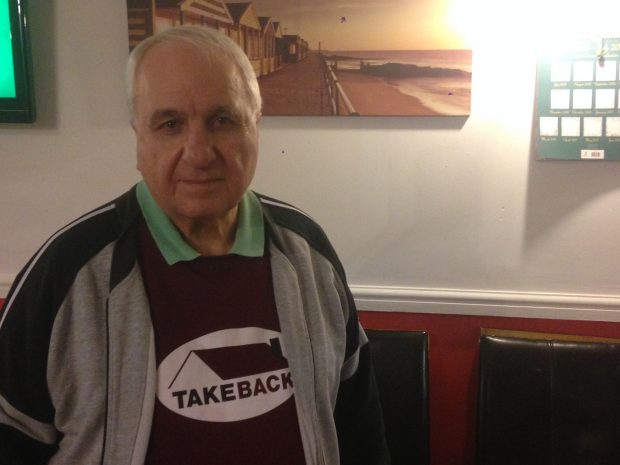 Volunteer Claudia Wyatt tells the complex story of 71-year-old grandfather, Mike, and his 11 years in limbo struggling to find a place to call home.

I STEP into a tired, dingy café, if you could call it a café, on Clifton Street, Splott. Mike ushers me in and invites me to take a seat. He potters around preparing tea for us. It is no warmer inside than out and I can almost see my breath as I sit shivering in my coat.

For Mike, a 71-year-old Iraqi Armenian Christian with almost nothing to his name, this place is home. It has been for over a year.

I have known Mike for four years now, but it is only in the last year that he began to tell me, bit by bit, about his situation. I have a strong relationship with this immensely proud, cantankerous, yet kind-hearted old man. It never ceases to surprise me how similar he is to my grandmother, particularly as he tuts at his mobile phone, jabbing at the screen the way people of an older generation, struggling to use technology, often do.

I’ve come to help him upload the hundreds of precious photos of his beautiful, smiling family sent via WhatsApp, complete with photos of his infant grandchildren. He coos at the pictures of the babies he’s never had the chance to hold. As I transfer them, he tells me their names and gives me a detailed explanation of who’s who.

Mike is stuck in limbo. He has missed over 11 years of family memories, including the marriages of his three children and the births and baptisms of his grandchildren.

Mike has fallen through every crack imaginable in the UK Asylum system. He is now destitute, without a penny, and the only place he has to sleep is a table in the café, on which he puts blankets, to cushion his old, frail bones. His health has begun to decline and he walks slowly with a pronounced limp due to his arthritis.

He now suffers from asthma, possibly due to his poor living conditions and unsurprisingly, his mental health has also taken a huge knock.

He has been volunteering with the student-led charity project, Student Action for Refugees Cardiff, since its very beginning – 10 years ago. I took over as president in September and affectionately call him “Boss” as he will never hesitate to call me up if he’s not happy with the way I’m doing things. Nonetheless, his presence is invaluable, acting as a cultural and linguistic go-between for the student volunteers and the asylum seekers and refugees who attend our weekly Wednesday drop-in evening.

At no point throughout his 11 years and three months living in the UK, has Mike been permitted to work. He has lived on the statutory allowance of £36.95 per week that those seeking asylum in the UK are dished out at the Post Office. Yet, these 11 years have been marked by frequent withdrawals to these payments and being turned out of Home Office accommodation. He has now received neither financial support nor accommodation for a year and a half.

“I used to stay with a friend but he got moved to another city. I don’t like asking people for money, it’s not nice. But if I do a favour for someone, maybe they’ll bring me a bag of rice or some food.”

When I asked Mike where he gets his clothes from he said: “From the clothes bank at the Trinity Centre and I can get food donations and a hot meal there on Mondays and Thursdays.”

For such a proud man, it is not easy for him to rely on the charitable handouts and the kindness of others to get by.

Unfortunately, Mike is not the only one for whom this is a reality. According to the British Red Cross, Cardiff has one of the highest levels of destitute asylum seekers in UK, along with Leicester and London.

The Red Cross states that almost 5,600 refugees and asylum seekers were destitute in the UK in the first half of  2016. They say one of most common causes of destitution among asylum seekers are problems with asylum support payments being stopped or suspended whilst they are still not permitted to work.

However, just because an asylum seeker’s claim is refused, this does not mean they can safely go back to their country where they may face imprisonment, persecution or be stepping back into a war zone. Asylum seekers may also be entitled to appeal the decision – a very lengthy process, but in the meantime, they may be removed from their accommodation and have their asylum support payments cut.

Detention by the Home Office is a very real possibility for asylum seekers in the UK, many are fearful of being picked up and taken by Home Office officials to a detention centre where they can be detained indefinitely.

Mike said: “In 2011, after I received a letter saying my application had been refused and I had no right to appeal I was arrested and taken to Cardiff Bay police station, then I was brought to Campsfield House Detention centre in Oxford for two months.

“After that, they took me to Gatwick airport where they put me on a plane with 24 other Iraqi people, each handcuffed to security guards. At the last minute my solicitor heard from the European Court of Human Rights and they pulled me off the plane again.”

Alex Fraser, director of Refugee Support at the British Red Cross, said: “No one should flee the war in Syria or political persecution in Eritrea, only to become destitute in the UK. But for many, reaching safety is far from the end of their journey.

“With the number of people fleeing conflict and persecution worldwide at an all-time high, our government should be doing all it can to uphold its responsibilities to refugees. However, these figures show that all too often people are let down by an asylum system that is inflexible and difficult to access.”

Emma Williams, chief executive of the charity Student Action for Refugees said: “There are many people who are left destitute in the asylum process. The biggest problem is when people receive refugee status and they are given a 28-day ‘move on’ period to get their documentation. Often they don’t come through before the end of the period so people become destitute.”

“At STAR, we believe in borders and a refugee determination process and if people have no right to refugee status and no right to any other form of protection then they should return. This process is not functioning at the moment. In the past what would happen was that you would claim refugee status and then you would sit and wait literally for years for your decision to be made.

“We then said it was not fair for people to be left in this poverty and uncertainty so the Home Office set itself a target of six months for each initial decision and what’s happened is these decisions are being made so quickly that they’re getting it wrong.

About 37% of appeals were allowed, so they’re pushing through these decisions really quickly and they’re getting them wrong a third of the time. You can see why people have no faith in the decision-making process.”