Meet the artists stitching their mark on Cardiff’s streets 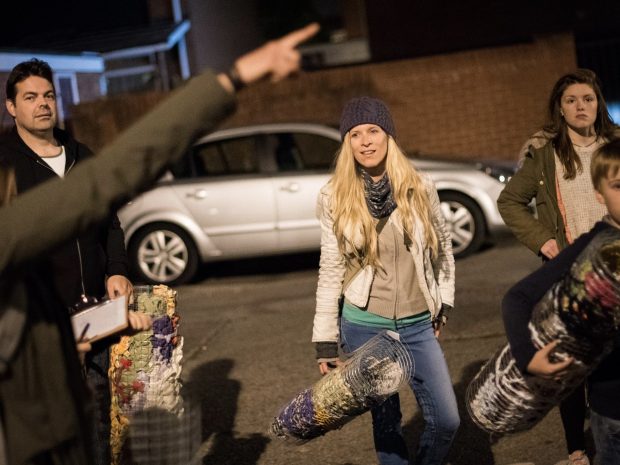 THE guerrilla cross-stitchers of Crossing Paths never dreamed their work would still be decorating the streets of Roath, Splott and Adamsdown one year on.

In October 2016, the group, formed by Rebecca Clark, founder of the Splott-based community interest company Green City Events, created over 50 pieces of cross-stitch art on the theme of gardening, wildlife and the outdoors and installed them overnight.

“We wanted to put them up at night so they appeared the next morning for people to find,” said Ms Clark.

The group collected the materials together and decided on designs, then each member took home a frame to start work on their own piece.

All the materials were upcycled from reclaimed materials collected from charity shops that couldn’t be used, and people’s old T-shirts and tights. The materials were cut into thin strips and cross stitched onto mesh frames. A close up of the cross stitch

Crossing Paths member, Melissa Cracknell said: “I made four pieces, the large bluebell piece and a ladybird on the gate of the Mackintosh community garden. I also made the white chickens on the fence of the Plasnewydd community garden and a couple of snails.” “I loved the guerrilla style of putting them up, it was so much fun, and was probably a lovely surprise for the local community to wake up too. I still enjoy seeing them dotted around.”

“Installing them was really fun and exciting, going out at night and feeling really mischievous, dressed up in hats and scarfs and secretly going around our neighbourhoods. It helped build a really nice bond between everyone.”

Ms Clark based her designs on some she saw in Valencia.

“But it was really nice to see people going really off the wall and doing some completely different ones. I love giant piece of sweetcorn which is slightly three dimensional and had a hairy texture like the fibre on corn.” This Sweetcorn design was made by Vickie McClure.

Ms Clark said: “We had no idea how long they’d stay up, maybe a couple of months at most. Some have faded, or taken down and just a few have been vandalised. We put them up fully knowing they were at the mercy of the public.

“We’re really surprised they’ve last this long, some of them have become quite recognisable features of those areas.” The art was made as part of the Made in Roath festival and Green City is not planning to make any more.

Ms Clark said: “Most of the time people just want us to come and do it for them, which defeats the idea which was to get people in the community involved.

“It’s more about saying, hey, look, anyone can do this in their own community.”