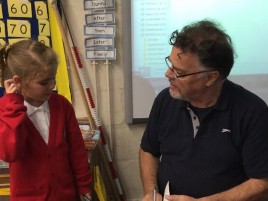 On World Book Day, Cardiff’s most prolific and widely-published children’s author, Jon Blake, spoke to The Cardiffian about his career, literacy in Wales and the challenges facing writers in Cardiff.

During his 30-year career Jon has written over 60 books.

“It’s either 62 or 63. I came here in 1987 with the hurricane that flattened all the tress in Bute Park,” he said, referring to the wild weather of October that year. The first book in Jon’s latest series, Thimble Monkey Superstar, is the only children’s book with a disabled lead character to be shortlisted for a major literary award.

In 2017, it was nominated for the Scholastic Lollies, awarded to the funniest UK children’s books each year.

Jon’s 12-year-old son, Jordi, has cerebral palsy and he based the main character of the Thimble Monkey series on him.

The father and son team also bounce ideas off each another for Jon’s next book.

Jordi reads all of Jon’s writing after school each day, and some of his ideas have made their way into his dad’s work.

Jon wants to normalise the use of diverse characters in literature: “It’s not something that’s about disability, it doesn’t shy away from disability, but that’s not the main subject of the story,” he said.

The foundation is the official charity of Cardiff City FC and works with children and young people in South Wales to improve their health and wellbeing. Jordi plays for a disabled football team and the foundation recognised his gift for language, asking him to speak at the event.

For World Book Day yesterday, Jon was at Insole Court, Llandaff, as part of their first Brilliant Books event. He did a workshop and reading session for two schools.

“I’ve been visiting schools and speaking to children since I was first published,” he said.

“I lived in Adamsdown for 19 years and kids would come round to my house when they found out I was an author, to borrow books.”

Figures from the What Kids are Reading report, which looks at literacy levels in children, reveal that the reading age of children in year 5 in Wales is 6 months lower than students elsewhere in the UK.

“Literacy and poverty are totally interlinked. Social conditions are by far the biggest influence on how well people read,” Jon said.

He linked lower literacy levels in Wales to high levels of deprivation and a lack of diversity in literature.

“People have to read things in books that are familiar to them, their language and their experiences.

“It’s a big problem for people who don’t see characters of their social class in books.”

Jon said that world book day was good for rising the profile of authors, but was concerned that the closure of book shops and budget cuts for libraries made life more difficult for local authors in Cardiff.

“It’s definitely got harder as a writer. When I first came here there were about six book shops, now there’s two,” he said.

There being fewer book shops meant that the remaining ones have had to focus on big-name authors like Roald Dahl and J.K. Rowling to survive, according to Jon. Kate Willetts, manager of the children’s section at Waterstones, The Hayes

Standing next to a display of £1 children’s books at Waterstones on The Hayes, Kate Willetts, 26, from Cardiff told me about how the store was celebrating World Book Day.

“The slogan for world book day this year is having 10 minutes each day for parents to read with your kids. That in itself progresses reading as well as interacting with other people.

This isn’t just when children are very small but continuing it until they go into secondary school,” she said.

Ms Willetts has been manager of the Children’s section at Waterstones for 18 months, but this is her first World Book Day there, “it got snowed off last year because of the beast from the east,” she said.

This year’s National Literacy Trust reading survey found that 26 per cent of children aged, 8-18, are reading daily outside the classroom compared with 43 per cent in 2015.

Half of girls and a majority of boys said they preferred using a screen to reading a book.