Home > Long Reads > From Auschwitz to Cardiff: A survivor's story

From Auschwitz to Cardiff: A survivor's story

The theme of this year’s Holocaust Memorial Day ‘Journeys’ summarised Terry Farago’s life, from Budapest to Auschwitz and finally to her Cardiff home.

The 86-year-old holocaust survivor was born and raised in the Hungarian capital until one day without any warning her family was rounded up and sent to Auschwitz.

As soon as the train stopped, Farago was separated from her mother and sister.

Upon meeting an older Jewish lady from Czechoslovakia, she asked where she could find them. The lady pointed to the smoke rising from a nearby factory chimney and said: ‘They are up there’.

The then 17-year-old Mrs Farago could not believe what she had heard. “I thought she was just a b***h,” she said.

A little over 12 years later, when the Soviets invaded Hungary, she decided to flee Budapest with her husband and ten-year-old child. It was at this point a visa came through the post from Cardiff and gave the family hope of a  new life. “I am still very grateful,” she said.

Her story features in Fragments: Transcribing the Holocaust, a book written by Frances Rapport, which tells the story of three brave women who survived the Nazi camps and went on to build a home in Cardiff.

“It is hard to talk about what happened,” she said. “When the book came out, after seven years, I thought it was worth it, to carry the torch, as they say.”

Sat by a framed photograph with her great-grandchild, Mrs Farago looked proud. She is well aware of the value of youth following the early loss of her mother: “It’s all for the future, for the young ones. To show that it did happen, it should not happen again,” she said.

Together with other distinguished guests, Mrs Farago attended the Memorial Day ceremony on Monday afternoon  at City Hall.

But when asked whether such ceremonies would prevent a tragedy of this magnitude from happening again, she was hesitant to respond.

“I am not a prophet, I have no idea. If it happened once it could happen again, but let’s hope that with all that publicity and the remembering days, it might not. Let’s hope, let’s only hope,” she said.

“But you can’t say that it won’t happen. Anything can happen.”

auschwitz, Farago, holocaust, holocaust survivor
You may also like 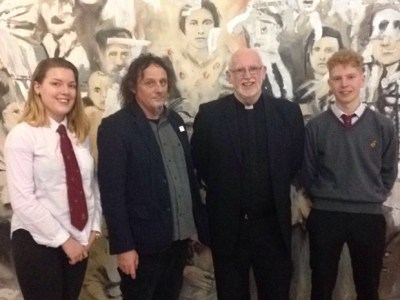