The number of pancakes consumed on the other 364 days combined probably comes nowhere near the amount that will be devoured in the UK tomorrow, excuse the unofficial statistic.

Many of us will be making a trip to the shops to stock up on pancake supplies as well as different toppings but spare a thought for the pancake houses of Cardiff in the run up to their busiest day of the year.

Staff at ‘Crepe Affaire’ on Hill Street next to St David’s Centre are expecting a busy but profitable day.

Assistant manager Faye Docherty said: “We expect to take around £2000 which is similar to a rugby day.”

Eating pancakes on Shrove Tuesday dates back over 1,000 years, making pancakes was a way of using up rich foods such as eggs, milk and sugar before fasting at Lent.

Nowadays Pancake Day has survived by appealing to people’s sweet tooths and has become commercial rather than religious.

Crepe Affaire’s favourite pancake is the I’ll Have What She’s Having, which consists of strawberries and Nutella and the creperie have ordered in extra supplies of both to contend with expected demand.

“We will be flipping pancakes outside the shop all day and the public are welcome to join,” Ms Docherty said.

‘The Pancake House’ in Cardiff’s Old Brewery Quarter has also stocked up to deal with the rise in custom.

Their variety and selection is nothing short of extraordinary but their Nutella and banana pancake is by far their biggest seller.

Pancake House employee Sophie Howells said: “We have 40-50 extra tubs of Nutella, I don’t know how many eggs and our basket of bananas has never been so big.”

Today should stretch the Cardiff Pancake House to its limit.

The small cafe will be borrowing tables and chairs from neighbouring restaurant ‘La Tasca’ as well as turning on the dormant second pan to create a separate takeaway section.

crepe, Pancake, Pancake Day, shrove tuesday
You may also like 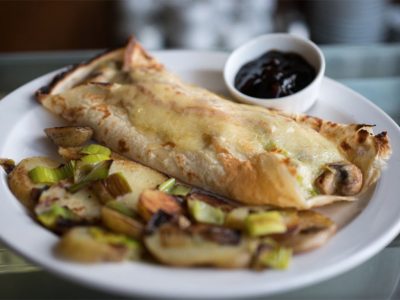 Seven Cardiff spots to celebrate Pancake Day this year
Pancake Day recipes: Your guide to a flippin' good day
Cardiff café prepares for Pancake Day rush
What are you giving up for Lent?
About Post Author