It could have been the south of France in Cardiff today as the spring sunshine came out to greet a pancake flipping event to celebrate Pancake Day.

The sun was shining, the daffodils were out and the only thing missing was a man with a beret, a string of onions and a concertina player.

Apparently, the UK record for the most number of pancakes flipped stands at 139 and a crepe café in St David’s 2 was trying to beat th

“It’s just a bit of fun for our regular customers,” said Kam Dhillon who runs crepeaffaire in St David’s 2.  “We held the flipping event outside and lots of passers-by wanted to have a go,” she said.

Utkansha Chauhan, 31, from Leckwith in Cardiff who managed to flip 70 pancakes

It was a very French affair and the café was busier than usual with customers treating themselves to extra special crepes for Pancake Day.

One of the competitors was 23-year-old Eric Boheas from Brittany in France who scored an impressive 40 flips.

“I come from the home of crepes so I should be good at it,” he said.  “Crepes started in Brittany as it was originally a poor man’s food because flour, eggs and milk were cheap to buy.”

One of the highest scores was a staggering 70 scored by Utkansha Chaulan, 31, from Leckwith in Cardiff.

A  favourite crepe on the menu today was one called I’ll Have What She’s Having served with fresh strawberries, chocolate or Nutella and cream.

The pancake or crepe flipping event was held outside because of the clement weather.  Results will be compiled at the end of the day and the winner will be notified.

Meet the Penarth food businesses that are plastic free 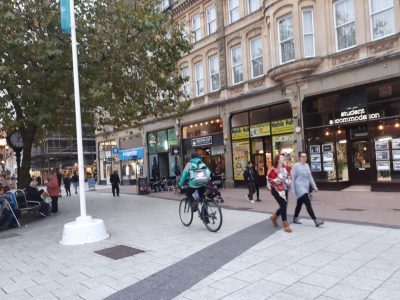