Two horses ran free on the M4 Westbound yesterday after a serious accident involving a horsebox left five people in hospital and one person trapped.

The accident occurred at 9pm when a red Nissan Terrano towing a horsebox collided with a grey Vauxhall Insignia also travelling westbound.

The horsebox became detached and both vehicles suffered extensive damage, with the Terrano flipping over onto its roof and the Insignia crashing off the road entirely.

The M4 Westbound was closed between junction 36 and 37 as five fire engines attended the scene to cut free one trapped passenger.

Police soon received reports that the horses which remained unhurt had escaped and were running loose in the westbound lane, causing a further accident.

They were secured in less than an hour by emergency staff.

Five people were taken to Morriston, Princess of Wales Hospital, one woman with serious injuries.

South Wales Police are appealing for any witnesses to the incident to contact them on 101.

Horsebox, Horses, m4, M4 Westbound
You may also like 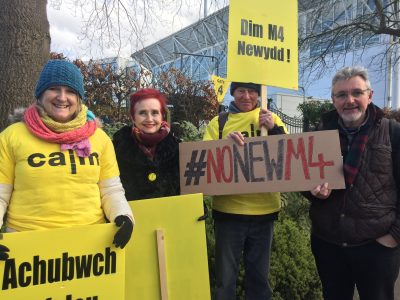