The Agatha Christie Theatre Company returned to Cardiff’s New Theatre this week for the eleventh production of its nine-year existence for the performance of the unique ‘Black Coffee’.

Black Coffee was Christie’s first play, written in 1929, and significantly is her only play to contain her legendary Belgian detective Hercule Poirot, played magnificently by Robert Powell.

Powell, best known for the title role in Jesus of Nazareth, as Poirot, is called to the house of famous physicist Sir Claud Amory at Abbot’s Cleve 25 miles from London. Sir Claud has discovered his valuable formula has been stolen but on Poirot’s arrival, with his hapless but lovable sidekick Captain Hastings, Sir Claud is found dead, murdered by poison.

In typical Agatha Christie fashion the murderer could feasibly be any one of six characters present at the time.

Christie wrote Black Coffee after being left disappointed by the portrayal of Poirot previous plays and motion-pictures adapted from her novels. Powell captures the very essence of Poirot as Christie conceived him and his methodical, intelligent approach is intertwined with humour as the Belgian gets to know the characters and starts to unravel the mystery.

The play lacks character depth in its early stages and could do with more extensive introductions of the suspects and their relationships with one another. This is not a criticism of the actors, nor the company, as they are slaves to Christie’s original.

The second and third act explore the psychological motives of each individual character and keep the viewer guessing as more and more details unfold. Christie places just as much emphasis on ‘whydunnit’ as the traditional ‘whodunnit’.

Olivia Mace is convincing as Lucia Amory, Richard’s wife, tortured by a secret, manipulated by an aloof Italian doctor. However Robin McCallum steals the show with his tremendous portrayal of Captain Hastings and the play’s best moments stem from his humorous relationship with Powell’s Poirot.

Black Coffee is impeccably acted as always by the A C Theatre Company, its classic ‘whodunnit’ set up intrigues as the plot oscillates to its dramatic conclusion. There are enough moments of humour and wit to break up the intense plot development and the play’s finale is surprising and satisfying in equal measure. 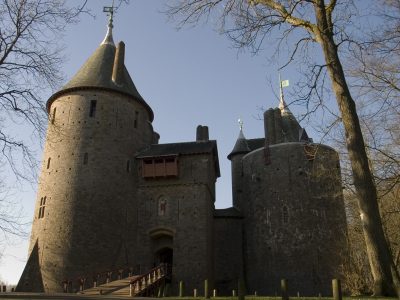 The Cardiffian picks … things to do over half term
New Theatre revival of Williams' classic Cat on a Hot Tin Roof is superb night out
Review: Footloose at the New Theatre
About Post Author