Penarth is lit up and ready for Christmas 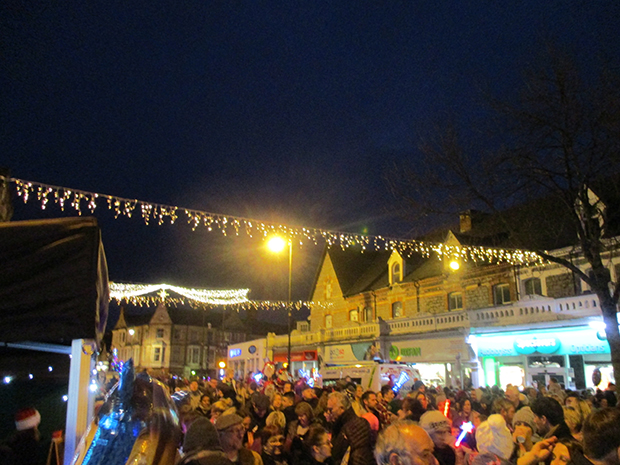 THOUSANDS of people turned up to see the Christmas lights being switched on in Penarth.

Owen Money, from BBC Radio Wales, switched on the town’s lights on Sunday with help from the Jack and the Beanstalk cast members.

The whole town centre looked festive, with Christmas trees on the roundabout at the top of Windsor Road and Stanwell Road, and lots of decorations in all the shop windows. Christmas trees on the roundabout between Windsor Road and Stanwell Road

There was a stage on the corner of Glebe Street and Windsor Road, which were both shut off to traffic all day, with lots of festive stalls and fairground rides.

Bro Radio set up the stage and hosted the afternoon, introducing the different acts, playing music in between, and leading the big carol sing-a-long.

A stall opposite the stage gave out carol sheets, and people in orange hi-vis jackets wandered through the crowd giving out sheets too. Children and grown-ups alike sang: The RNLI had a lifeboat at the top end of Windsor Road that children could climb on and see up close. Further down the road towards the Ex-Servicemen’s Club there was a merry-go-round, a train ride, a teacup ride and face painting.

Opposite the stage was a separate fenced off area for parents with wheelchairs to watch everything that was going on.

There was lots of festive food and drink, with a stall selling candy floss and hot chestnuts. The Windsor pub had a stall selling mulled wine and hot cider, with staff dressed in Santa hats and Tabernacle Church were wandering through the crowd giving out free mince pies.

Tabernacle kept the traditional Christmas spirit and had a nativity scene. Also around the corner on Glebe Street, children could meet Santa and see goats with reindeer antler headbands. Tabernacle put on a nativity scene

Nick McDonald, from Penarth Town Council, organised the event. He said: “We are delighted to bring a free event to the town centre, and bring families together. It’s good for businesses, residents and visitors too. And it’s good to see lots of people from Cogan and other surrounding areas have come along as well.”

He said: “It’s about supporting the local economy and loving where you live. The scheme was relaunched this year and there are thirty shops taking part. You can buy the card from any participating shop. It costs £2 and lasts for life, and with the range of great offers you could make your money back in half an hour.”

The Jack and the Beanstalk pantomime runs at the Paget Rooms from Thursday January 4th till Wednesday 10th January. The panto stars Owen Money and is presented by Rainbow Valley Productions. Christmas lights on above the busy crowds