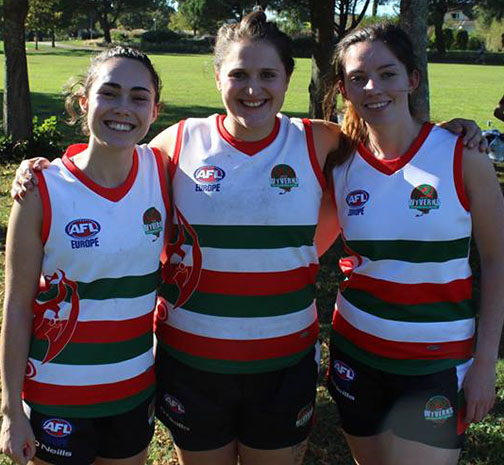 A GROUP of women in Cardiff want to expand their Aussie Rules squad so they can compete against other teams.

South Cardiff Panthers train fortnightly at the Swalec stadium. Since it was set up by an Aussie in 2006 the men’s team has established itself as league champions.

The men have also been abroad to compete in the European Champions League and members of the squad have represented Wales at national level.

The Welsh Panthers at the Euro Cup, Bordeaux, 2017 – the team had to borrow women from other sides to make up the numbers.

But now the club is hoping to increase the number of women from the current three players so Wales will have its own women’s club side.

Team captain Zoe John, 25, from the Heath said: “I came across the sport through social media and I had no idea what it was. Me and a group of friends decided to try it out. Everyone was really friendly and made us feel welcome.

“Unless people actually see women competing in the sport they won’t know it’s open to them. It is open to women of all abilities and ages.

“Some girls may have had bad experiences when they were younger and that may have put them off sport, but they are welcome to train with us.”

At the moment the women have to join other teams to compete.

“In October, we travelled to Bordeaux for the Euro Cup, but we had to join up with Finland and Italy as they were also lacking numbers. Our aim is to grow the Welsh squad.”

Miss John believes women’s sport isn’t given enough attention and that is why many women aren’t involved.

But she believes figures such as UFC star Ronda Rousey have given women a platform they never had.

“Ronda Rousey is headlining shows in UFC and women’s football is getting more of a recognition now. The impact it will have on the younger generation growing up and seeing women on the television will be huge.

“Women need to be given a chance in competitive sport but people think women aren’t strong enough. If women want to play the sport, let them get involved.”

Player Mary Pickard, 22, is a student at Cardiff Metropolitan University.

“It was something that I saw online through social media and wanted to get involved. I wanted to keep fit so I decided to try it out,” she said.

“Many girls think the sport is too tough for them but everyone at training is so supportive and welcoming.

“I have made so many friends through the club and I enjoy the social aspect of training because we are all a group of friends.

“Women’s sport is not given enough focus, but it is definitely something that is growing and that can only be positive.”

Team member Mike Marsh, 34, from Heath in Cardiff wants the women’s squad to grow as much as possible.

“The men’s team has been established for quite a while now. There are four teams in Wales but there used to be six.

“We want a squad of 15 so we can compete against other teams. We’ve travelled with the girls around the UK to play other established teams,” he said.

“You only hear about the common sports for women such as netball and football. Aussie Rules is different but it’s definitely something that can grow.”

Miss John’s wants to establish a regular squad so they can develop players.

“It’s definitely realistic as we are the only women’s team in Wales so our players can have realistic ambitions to represent the Wales squad.”

The men have also been abroad to compete in the European Champions League and members of the squad have represented Wales at national level.

Aussie rules is played on an oval shaped field with two teams of 18 players. It is a contact sport, but tackles have to be made between she shoulders and the knees.