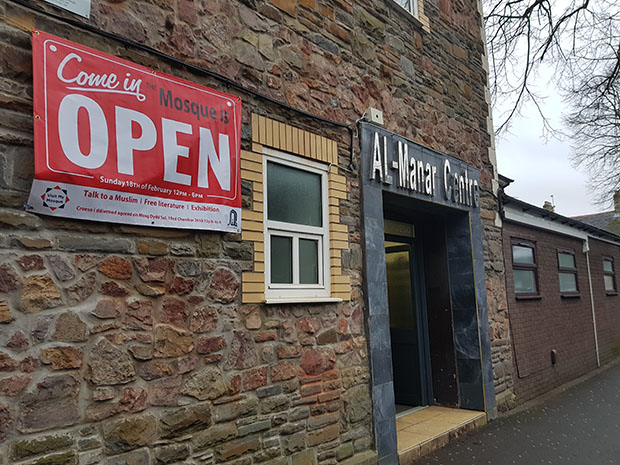 MOSQUES across Cardiff opened their doors to hundreds of people at the weekend to help break down barriers.

According to a recent YouGov poll, 90% of the British public have never been inside a mosque.

Visit My Mosque Day is organised by the Muslim Council of Wales and 12 in Wales took part including Al-Manar Mosque, on Glynrhondda Street, Cathays.

“We need to open ourselves to society and break down barriers so people can understand Muslims better,” said Imam Kamaal.

“The Mosque is open to anyone at any time, so if anyone has any questions then they are welcome. Our religion is one of tolerance and I am happy to see so many people are open to learning.”

The mosque had exhibitions about the history of Islam. The Quran was also available to read in 10 languages. Qurans in different languages at the mosque

“I’ve been to this mosque several times but today I wanted to encourage members who I represent to join me. I listened to the Quran for the first time today and it’s fantastic that the mosque has these facilities,” she said.

“In Cardiff we have a diverse community but anything that helps break barriers is fantastic.” Earlier this month Cardiff man Darren Osborne was jailed for committing a terror attack on Muslims in London last year.

Ms Stevens added: “The man who committed the awful act doesn’t represent the views of the vast majority in this city. We are an open and tolerant city.

“We’re not represented by that man who committed those awful crimes.” Kathryn Griffiths and Julie Kennedy travelled from Pontypridd to visit a mosque for the first time.

“We’ve always been interested in Islam and thought today was a great opportunity to learn,” they said.

“I hope this event can broaden people’s knowledge and I think it’s about time mosques did more in educating people.

“There is no harm in learning about religion, whether you agree or not, it’s vital we have some knowledge.” Kathryn Griffiths, from Pontypridd, her first visit to a mosque

Martin Jones, from Cardiff said: “It’s great to see so many non-Muslims here, I didn’t expect such a great turn-out. The exhibition is great.”

Arran Morgan, 23, from St Mellon’s is a volunteer at the mosque. He converted to Islam two months ago.

“We all know the stigma around Islam but when you come to the mosques you see it’s completely different.

“Some people walking through the door rarely converse with Muslims so this is a chance for them to ask questions.

“I’ve learnt a lot about the history of Islam. I would advise anyone to visit their local mosque at any time as people are always willing to help.”

A spokeswoman for the MCW said: “This year, over 200 mosques are open across the UK which shows the event is growing every year.

“Many mosques in Cardiff have a huge outreach team and we are working together to improve this.”