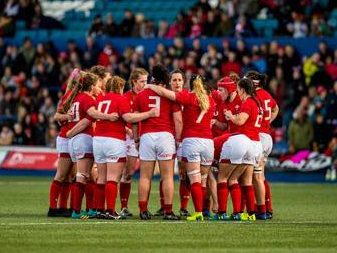 WALES women were battered and bruised in Montpellier, and things may not get any easier this weekend when they come up against a confident Italian side bolstered by their bonus point win in Glasgow.

Reigning champions France hardly put a foot wrong in their opening encounter in this year’s Women’s Six Nations. They were too quick and powerful for the Welsh in the 52-3 win.

At times Wales were completely opened up, with missed tackles aplenty, the game was possibly one to forget for much of the team.

For Wales there were definite areas to improve, defence being the specific focus, in making sure tackles stick and trying to counteract the prospect of crossfield kicks. However, that is to take nothing away from a superbly fast and well drilled French side.

In attack, though there wasn’t much, taking care of the ball is always a must. A pass intercepted by a French centre on her own try line led to a try after she ran the length of the field.

There was one silver lining, however, as 18-year-old Scarlets flanker Alex Callendar made her debut after coming off the bench.

Looking ahead to Italy

The Italian pack proved far too strong for the Scottish, winning 28-7, and while the sheer pace and hand speed of the French out-did Wales in Montpellier, Italy will look to be much more physical through the middle.

Franco, their No 7 was the standout player, making consistent tackles and aiding the back line with attacks. She will prove a handful for Rowland Phillips’ side.

Italy’s poor discipline though is somewhere the Welsh team could look to try and gain some momentum, as the Azzuri were down to 13 players at one point in the Scotland game.

It will be a tough match, and Wales will have to be physical in their first real chance for Wales to get some momentum going into the tournament.

Prop Caryl Thomas said: “We need to take the positives from France and look at the few things we need to tweak in order to put in a performance against Italy.

“We know it will be another physical game, but it’s always a strong battle with them. We need to go out there and set the precedent in the first five minutes.”