Home > Long Reads > Blue: laughter and tears of a family hit by dementia

Blue: laughter and tears of a family hit by dementia 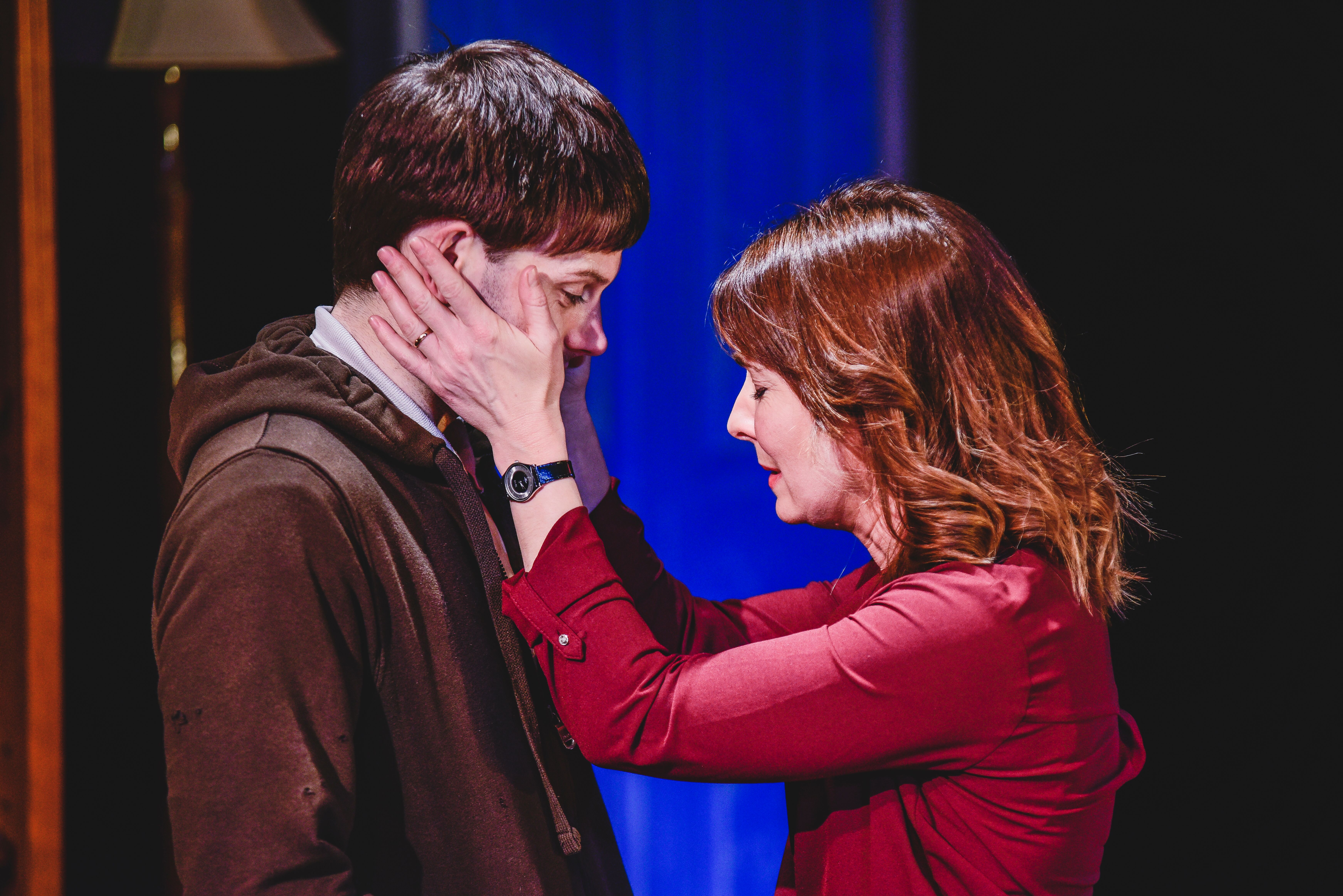 A new play opened in Cardiff last night tackling dementia and its effect on loved ones. Louise Lazell interviewed the young Welsh playwright Rhys Warrington before the show and reviews the first showing of Blue. IT is a big week for Rhys Warrington; it is his 26th birthday today and last night his debut play was staged for the first time.

Blue, at Chapter Arts Centre, took the audience on a turbulent journey as it followed a family coping with the absence of their father, who suffers with dementia.

When Rhys arrives at the coffee shop where I am meeting him, he pulls back the hood of his baby-blue raincoat and smiles as he recognises me; his presence is soft, immediately warming.

At just 26, Rhys says that he is always the baby in the room. His debut play came about after working with the producer of the theatre company Chippy Lane Productions and performing in their first production, Love steals us away from Loneliness.

The producer, Rebecca Jade Hammond, later selected Rhys to write a play revolving around a family in crisis for Chippy Lane, which prides itself on its Welsh name.

With this, Rhys was impelled towards the topic of dementia, something with which he has a lot of experience.

“The germ of the idea came from her, the family dynamic, but dementia is something very personal to me and has also touched Rebecca as well.” Rhys explained.

Rhys’ dad has vascular dementia, the second most common type of dementia which is estimated to affect around 150,000 people in the UK.

Rhys’ honesty with me around his experience of his father’s dementia explains why Blue is so beautifully performed; portraying the reality of dementia with both sincerity and starkness.

“It was challenging. For a long time I’ve wanted to write a play which examined memory.

“To be touched by it in such a heavy way so young is something I have shaped my character around.

“My dad is in wonderful, wonderful specialist care now. It is joyous to go and visit.

“When he was at home it was really difficult, his personality changed and his temperament changed.”

One of the driving forces behind Blue for Rhys was the lack of representation around those affected by dementia, as opposed to those suffering with it.

“I think at 21 – when it was all happening – I was slightly frustrated. Any representation of dementia in the arts is brilliant because it’s a crisis but they focus the attention on the dementia sufferer.

“So in Blue, the dementia sufferer doesn’t feature. It is very much about the family and how they are left to navigate the social, financial, emotional and psychological impact of caring for somebody with this disease.”

Moreover, Rhys explained that there is a tendency in the arts – especially on television – to portray a dementia sufferer as doddery or forgetful. Yet Blue is not subsumed by the darkness of the unspoken disease that affects the characters, it is filled with quick-wit and laughter.

Rhys’ ability to move the audience through the confusion and fragility of a family on the brink of crisis while still invoking humour very much reflects the experience of life with a dementia-sufferer.

“As difficult as it was and as sad as it was, there were still moments of joy where Dad would say something funny or there would be a glimmer of his old self and for 20 minutes we’d laugh and then it would go back to not being funny anymore,” he said.

Rhys now lives in London, however he grew up in Carmarthen which is where he decided to base the play. He laughed as he told me this: “Somebody said to me yesterday that the only reason you would have a play set in Carmarthen is if you’re from Carmarthen.”

Perhaps unexpectedly, Carmarthen emulated aspects of American dramas for Rhys, which was another leading influence for Blue.

“I’ve always found a connection between American dramas and Wales – they are all rooted in family.

The script of Blue was published on Tuesday, adding another memorable moment to Rhys’ week.

“I was delighted. I went downstairs and I just burst into tears. This woman opposite me was trying to have a glass of wine and looked very confused as I was sat there crying into my packet of Walkers crisps.”

Rhys future as a playwright certainly looks bright. Short-term, he hopes that Blue will find its way onto London stages. Long-term, he would love to write for TV.

Keep your eyes peeled for that baby-blue raincoat, because Rhys Warrington is a name and face to remember.

Review: a family at crisis point The cast of Blue in the awkward dinner scene

Nestled in rural Carmarthenshire, the new Welsh play explores the journey of a mother, her son and daughter all battling with the pain of their absent father’s dementia.

This play is undoubtedly driven by its strong women. The mother Lisa, played by the fantastic Nia Roberts, has the audience bursting with laughter through her quick wit but also recognisably contradictory maternal love with her children.

Lisa’s constant and warming reminiscence of her husband brings to the surface a discussion of past and present; the difficulty of grieving for someone lost, but not yet dead.

The loud and exuberant Elin, the daughter returned from university, invites a student teacher from her past, Thomas, into her home. Recently bereaved himself, Thomas is thrown into an awkward evening with the messy Williams and acts as the host to each character’s still translating emotions.

Clashing personalities pivot the play between moods, however it is the theme of miscommunication drives the underlying tragedy of Blue; how individuals’ coping mechanisms create a fierce crucible of conflict and misunderstanding which throws the audience from laughter to tears.

Chelsey Gillard’s direction is commendable, preparing the audience for a bubbling finale. The actors each give beautifully crafted performances; four completely different displays of raw emotion, presented in a thoughtful yet surprisingly light-handed manner throughout the play.

Confusion and wrought emotion bring bitter truths to the table and the cracks of the Williams family lead to a shocking and destabilising climax.

The vulnerability of the characters in the height of the denouement is intense. The audience is left confused yet overwhelmed with emotion; these moments of confusion are not annoying for the audience but reflective of the character experience.

Produced by Chippy Lane Productions, which champions Wales-based pieces, Rhys Warrington’s debut play is a must-see. Taking a step back from the focus of the dementia sufferer, Blue looks at the loved ones affected and opens an important and often neglected conversation about the disease.