Home > Uncategorised > Language monument built after a decade of delays

Language monument built after a decade of delays 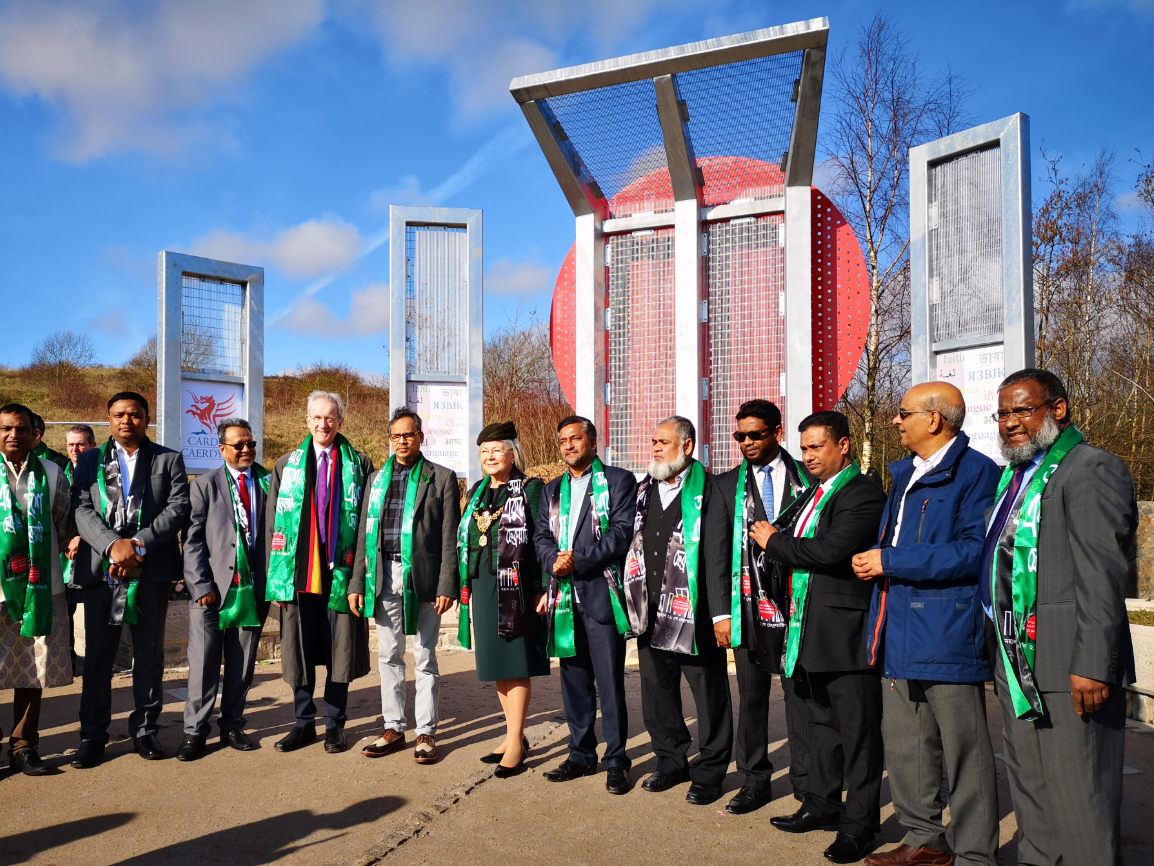 THE FINAL stone was laid on a community funded language monument in time for its opening ceremony on International Mother Language Day.

Community groups, schools and politicians from Wales and around the world gathered at Grangemoor Park, Grangetown, yesterday to celebrate the completion of a project that was 12 years in the making.

Mohammed Sarul Islam, Deputy Chair of the International Language Monument Trust, told The Cardiffian: “We invited every single Welsh community today because Wales is a community of communities.” Mr Islam explained that Grangemoor Park was the third location where planning permission had been submitted for the monument, after issues at earlier sites in Clare Gardens and Spencer Gardens stalled the project for over a decade.

Coun Huw Thomas, leader of Cardiff Council, told the crowd that the council had donated the land in Grangemoor Park, adding: “We finally got here and I think you will all agree that it was certainly worth the wait.”

The International Mother Language Monument (IMLM) foundation was set up in 2007 and raised the £150,000 needed for the project at gala dinners and smaller community events.

Coun Thomas continued: “Cardiff has a proud history as an open, diverse and inclusive city that has welcomed people of different languages and cultures from around the world.

We are also a confident bilingual capital city, where Welsh and English can be heard every day, something which helps distinguish Cardiff on the world stage,” he said. Leader of Cardiff Council, Huw Thomas, lays a wreath at the foot of the monument.

Around 50 pupils from Cardiff schools attended the event, performing songs written for the day in both Welsh and English and laying flowers at the base of the monument.

Holding a sign reading ‘International Mother Language Day’ – with the lettering made of flags from around the world – pupils from Gabalfa Primary School sang: “There’s a story to be told – from Bangladesh, Jamaica, Pakistan and Libya, Yemen, Venezuela, Saudi, Wales and Africa. We all want to see a world that lives in peace and harmony.” Gareth James, Deputy Headteacher at Coryton Primary School, Whitchurch, said: “There have been assemblies and workshops in school so that the children understand the importance of today.”

Mr James went on to say how Coryton Primary has links with schools in other countries, giving the pupils a better understanding of other cultures and languages.

Coun Mike Jones-Pritchard, who works full-time as an architect and was involved with the development of the monument, told The Cardiffian what the design represents: “It depicts a family, with a mother at the centre of the structure leaning over in protection.

The two pairs of structures next to it are two sets of children of different ages.”

Grangemoor Park is built on the site of a landfill which closed in 1994.

Safety and environmental concerns had to be considered when planning the project, according to Coun Jones-Pritchard, who said that builders had to avoid disturbing a layer of plastic covering the landfill during construction.

“It’s taken a long time for all the fundraising to be in place and all the environmental concerns to be satisfied – building at a time of the year when we weren’t going to harm wildlife,” he said.

The date of 21 February was chosen for its significance as the United Nations Educational, Scientific and Cultural Organisation’s (UNESCO) annual International Mother Language Day.

Bangladesh started the event in 1952, and it was adopted by UNESCO in 1999 to promote native languages all over the world.

Let us celebrate the power of mother languages to build peace and sustainability!

Coun Jones-Pritchard gave details about the history of the event: “The government in Bangladesh was forcing people to speak Urdu and not their native language – Bangla (Bengali).

“This monument is for the right of every individual to have their own mother language and to be able to speak it,” he said.

The Welsh government is implementing policies through ‘Cymraeg 2050,’ with the aim of having a million Welsh speakers in Wales by 2050, there are currently around 500,000.