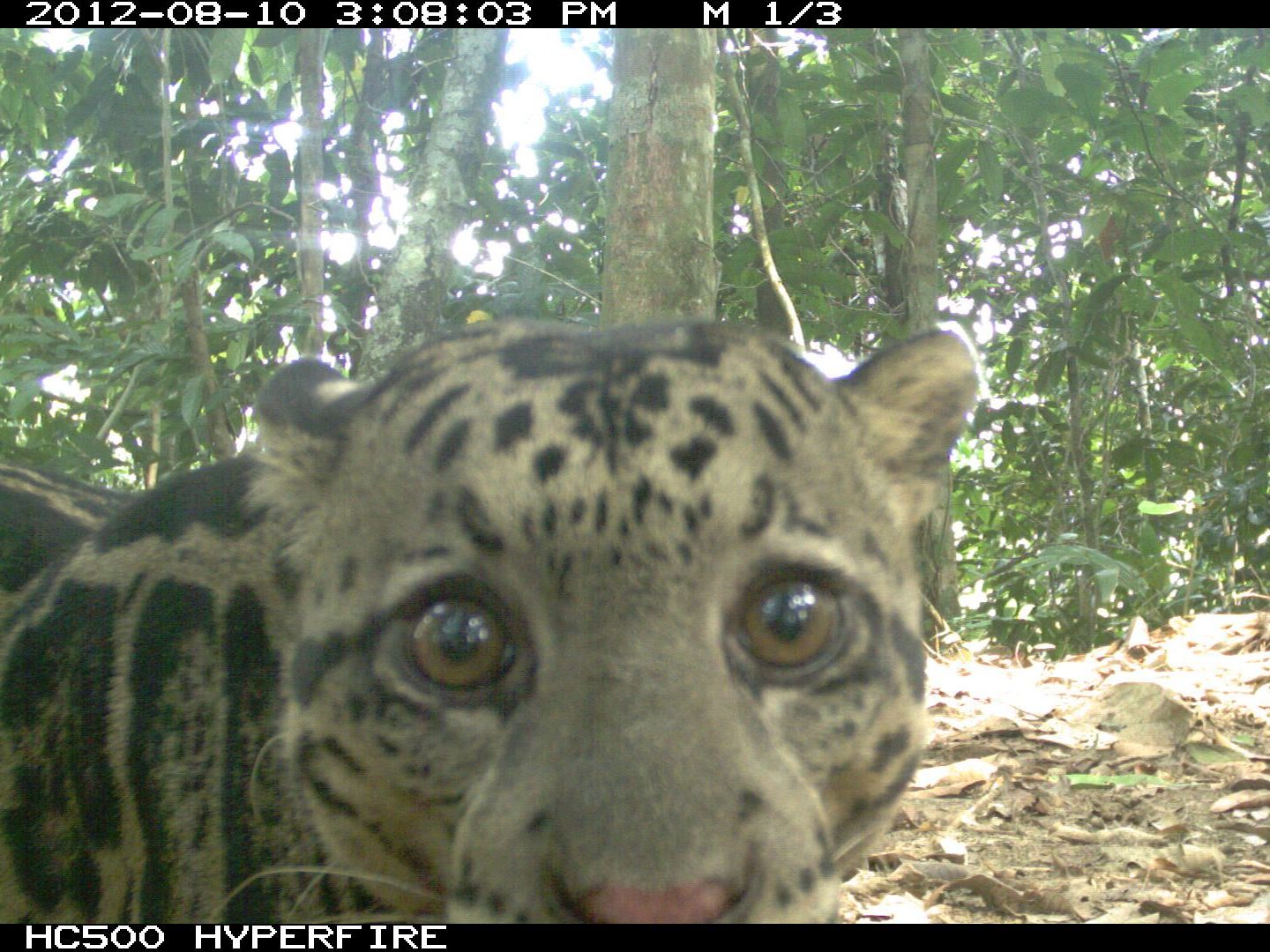 Close up of the Sunda clouded leopard taken by a camera trap in the Kinabtangan forest, Sabah, Malaysia. Photo by the Danau Girang Field Centre.

A RARE and endangered Leopard may have a brighter future due to the work of a Cardiff researcher.

Dr Benoit Goossens, from Cardiff University and his team at the Danau Girang Field Centre, Borneo, have created a 10-year plan to help the Sunda Clouded Leopard cope with habitat fragmentation.

There are estimated to be 750 individual Sunda clouded leopards left and the species is listed as vulnerable on the International Union for Conservation of Nature. It is one of the least studied big cats because of its rarity and because it is only native to Borneo and Sumatra.

Dr Goossens’ team measured the leopard’s population all over the Sabah area of Borneo to see how it was coping with the loss of its habitat.

Sabah has been called a global hotspot for forest loss and degradation due to timber and oil palm industries with 80% of the land surface impacted by high impact logging or clearing operations from 1990 to 2009. The study, which forms the basis of the State Action Plan, was collaboratively carried out by Cardiff University School of Biosciences’s Danau Girang Field Centre along with Oxford University’s Zoology Department Wildlife Conservation Research Unit (WildCRU), the US Forest Service and Sabah Wildlife Department.

The Danau Girang Field Centre is in the northern portion of Borneo and is a collaborative research and training facility managed by the Sabah Wildlife Department and Cardiff University.

Dr Andrew Hearn, from WildCRU, said: “Sabah is a stronghold for the Sunda clouded leopard in Borneo, yet this rarely seen animal is found at very low population densities, typically as few as 1-5 animals every 100 square kilometres of forest.

“Such rarity, coupled with the fact that their forest home is shrinking and becoming increasingly isolated, may expose these beautiful cats to the negative effects of population isolation, as individual animals struggle to disperse across the landscape.”

The State Action Plan explains that the protected areas of its habitat are too small and fragmented to secure the long-term survival of the leopard and that more areas of forest need to be protected and some reclaimed from oil palm plantations.

Without jungle corridors linking the areas of protected lands the leopard is left in small isolated pockets of jungle, jeopardising its survival due to lack of food, a lack of genetic diversity and increased proximity to humans who hunt or poach the rare animal.

Dr Goossens said: “The two biggest threats to the clouded leopard are habitat loss and hunting, poaching and the animal trade. Wildlife cannot survive without its habitat and for leopards it is being lost to humans and oil palm plantations.”

The research showed that the leopards will avoid oil palm plantations at all costs, moving along roads and incredibly narrow jungle ridges to reach other areas of jungle.

The research tracked the movement of the leopards by fitting satellite collars which eventually drop off. Dr Goossens explained that whilst having protected areas is good, most of the protected land is now enclosed by palm oil plantations cutting off males and females and reducing genetic diversity which is needed to stop genetic problems.

The leopard is also threatened by disease transmission from domestic cats and dogs, a problem that has already affected African Lions, Ethiopian Wolves and Amur tigers.

This occurs when the land use is changed – from jungle to palm oil plantations – as it means that infrastructure such as roads and rail developments penetrate the forest allowing dangers, such as disease, poachers and hunters in.

Dr Benoit Goossens said: “The Chinese medicine trade is a huge threat to the animal. Picture from a camera trap by Danau Girang Field Centre

“Habitat loss can be driven by climate change in some cases but sometimes just people who need the land for food, power etc. That’s the biggest threat.

“Species can adapt to climate change as it doesn’t happen from one day to another but if you send hunters into the forest, they can deplete the whole forest within a year.

“You don’t need long before a large animal is extinct, they can survive as long as they have habitat but without it there is no hope.

“I have to spend the next ten years doing something about it and pushing for the action, so there is pressure, but I am not alone and we do things together.”

The popular series Borneo Jungle Diaries this week released an episode on the Clouded leopard.