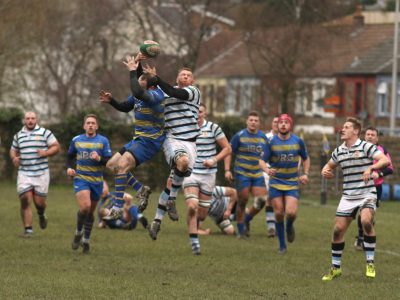 The Wanderers may have drawn last time out, but are unbeaten in their last ten. Defeat is not an option for Lyons’ men tonight. (Alyn Humphreys Photography)

With only nine points between the two sides it is everything to play for this March in the battle for the play-offs.

Defeat for Rhiwbina six days ago has left them in a position where they simply cannot afford to lose.

Despite managing to cut the gap on Wanderers to nine points with a bonus point in their 21-15 defeat at Gilfach Goch, who are rooted firmly in the relegation zone, Lintern’s men will need to bounce back quickly.

The Squirrels still hold three games in hand on Lyons’ men but two defeats in their last three is worrying form for a side who, before defeat to St Joseph’s last month, had won eight on the bounce.

Glamorgan, meanwhile, need the Squirrels to slip up even more.

Lyons’ men may be unbeaten in their last 10, but failure to win tonight puts Rhiwbina in the driving seat to break their hearts for a second season in a row.

Glamorgan found themselves in a similar position this time last year as two defeats to eventual champions Ystrad Rhondda RFC in April consigned them to second in the Championship.

With Glamorgan having just missed out on the play-offs, last season’s champions, Ystrad Rhondda RFC, now occupy second in the Championship.

Things are different for the Wanderers this season, however. They may not have had the success in the Silver Ball and Mallet Cup this time around but without those cup ties adding to their hectic schedule, they find themselves in prime position to stop the Squirrels from finding the nuts.

John Lyons told The Cardifian: “We need to win, we really do. There’s no two ways about that. We’ve got a good side out and we’re looking to play rugby. The pitch will suit our wide boys, especially the quick ones like Phil Pariyo and Max Cunnington.

“I haven’t seen the Rhiwbina side yet, but I should imagine it will draw a crowd and it will be all guns blazing from both sides I’m sure, as they always are. It will be, I’m convinced, a really good game to watch and a good spectacle.”