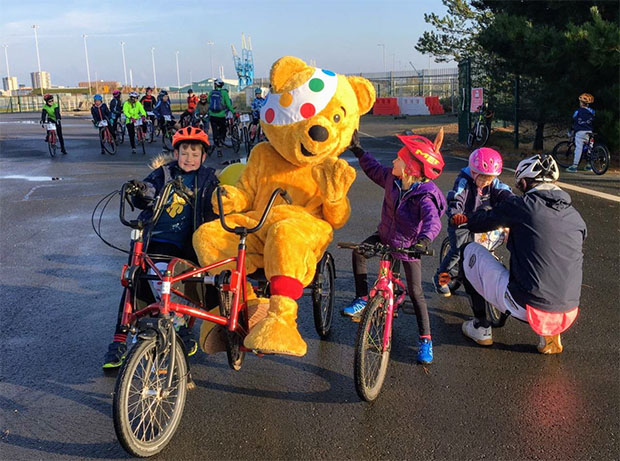 WHITCHURCH Cycling Club was helped by Pudsey Bear on Cardiff Bay barrage as members raised £1,045 for Children in Need.

He joined 86 people who took part in the event on Saturday. The youngest was just three years old. The club used a JustGiving page to bring in sponsorship.

“We raised almost 10 times as much as last year,”said Zoe Briffett, 43, who founded Whitchurch CC in 2016. She was overwhelmed by the public’s support:

Three groups of cyclists started out in Cardiff Bay.  Children aged three to eight completed laps of the barrage, earning a tick on their card for each lap done.

Members of the public stopped to watch the event and take photos with Pudsey. Many parents and grandparents also took part.

A lap of the barrage is nearly one mile long: some six-year-olds completed 14 laps.

Freddie, eight, said he had “looked forward to the event all week” and liked being out on the bikes with his friends. “Cycling Pudsey up and down was very hard work”, he said.

“We didn’t lose anybody to the playground. At 12 o’clock I said, ‘okay, last lap,’ and they were still trying to get another one in,” said Ms Briffett.

Some of the older children cycled up the Taff Trail. One group of 10 to 13-year-olds completed 20 miles inside three hours.

Whitchurch CC is a part of Welsh Cycling’s Go-Ride scheme; an initiative geared towards young cyclists.

Go-Ride coach for Cardiff, Will Soffe, attended the event and helped push Pudsey across the barrage.

“The event was brilliant! The children were having so much fun and really enjoyed ticking off each lap of the Cardiff Bay Barrage in their booklets. It was wonderful to see a Welsh Go-Ride club create such a well organised event for a great cause like Children in Need.”

He said: “It was wonderful to support our local cycle club at their event. My involvement was to put them in touch with Cardiff Council’s barrage manager. The club is doing a fantastic job bringing cycling safely to the community.”

Last year, the club raised £156 for Children in Need through a cake sale and family fun day. Ms Briffett said this year she went “more public with it”.

“I was thinking of somewhere safe for the kids to cycle, and somewhere that could include all the ages and abilities that we have. It was also a great starting point for our more advanced riders, and it was a safe area where the children could do laps of a decent length, that would be visible to the public.”

“It’s good for the kids to be able to help others,” she said.