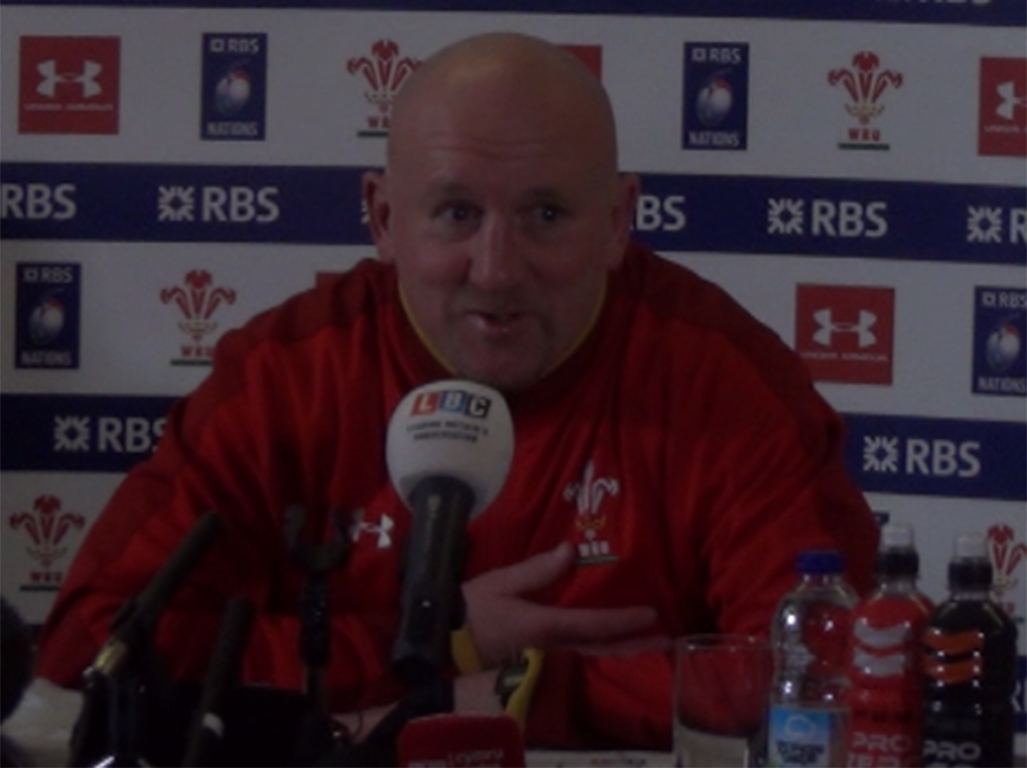 WALES defence coach Shaun Edwards allayed fears over George North’s injury by saying he was fit and raring to go ahead of Saturday’s match against Scotland.

North injured his leg in the 33-7 win over Italy, and despite being named in the starting line-up against England, Alex Cuthbert wore the number 14 jersey after the Northampton man had to pull out. North has suffered lapses in form amid a succession of head injuries in the past two years (Credit: Liam Warrender)

“We’re looking very healthy at the moment – definitely healthier than we were in the England week,” said Edwards.

“I want him [George] to concentrate on his defensive duties. I think his defence has definitely improved over the last 12 months.

“He came into this game as a young player. You don’t select someone because of their defence – generally it’s the attack you select them by. It’s over to the defensive coach to help them to improve with the defence.

“George’s worked very hard at it, studied very hard. In the last 12 months, it’s finally clicking with him. He’s reaping the rewards.

“Then if he gets the ball we want that X-factor that he showed in the first test against New Zealand.”

Edwards also commented upon Wales’ embarrassment of riches in the back-row, with the returning Taulupe Faletau putting pressure on the incumbents Ross Moriarty, Sam Warburton and Justin Tipuric.

“It’s a great position to be in. Our back-row played pretty well last time.

“Both teams [England and Scotland] are very competitive at the breakdown. We practise our defensive ruck skills every day and it’s pretty obvious they [Scotland] do the same.

“It’ll be a battle royale at the breakdown.” Shaun Edwards addressed the media at the Vale Hotel ahead of Saturday’s match away to Scotland (for a full video of the press conference, scroll down to the bottom of this article)

Though Wales have not lost to Scotland since 2007, the squad knows this Scotland side is a more daunting and exciting proposition than in previous years.

“Any team within a hair’s breadth of being in the semi-final of a World Cup, you have to respect them.

“The World Cup is always the biggest test of you as a team. They’ve obviously gathered momentum over the last couple of seasons.”

“Stuart Hogg is talk of the town at the moment. He’s one of the most exciting players around.

“You always look at the opposite nine and ten, but games are won up front.  That advantage line battle will be pivotal.”

Edwards said he was very happy with Wales’ defensive form in their last three matches, in which they have conceded only four tries against South Africa, Italy and England.

“After the Australia game [which Wales lost 32-8], I changed the running lines of the backs.

“I felt we needed to be stronger in the middle. To do that, sometimes you have to adjust elsewhere.

“I think it’s worked to be honest.”

Edwards also explained what went wrong in the lead-up to Elliot Daly’s match-winning try in the 21-16 defeat to England.

Whereas many fans pointed the finger at Jonathan Davies, Edwards suggested it was his namesake Gareth who made the error.

“We went off structure. From any turnover, we’re supposed to go two rucks to get our backs on their feet to fill the pitch with kick-chasers. We didn’t do that.

“We passed it back to the kicker after one ruck, which was a mistake. I don’t think Jonathan expected the ball, he expected a two-ruck exit play.

“That’s probably one of the reasons why his kick wasn’t as accurate as he normally does. When one of us makes a mistake, we all make a mistake together. If they miss a tackle, I miss a tackle.”

Wales’ defence supremo was not willing to be drawn on the news Wales will face Georgia for the first time next autumn.

“I am a coach, not an administrator. When we do play Georgia, I hope we don’t let them score many tries.”