Home > Sport > Rugby > View from the try line: the race for second place

View from the try line: the race for second place 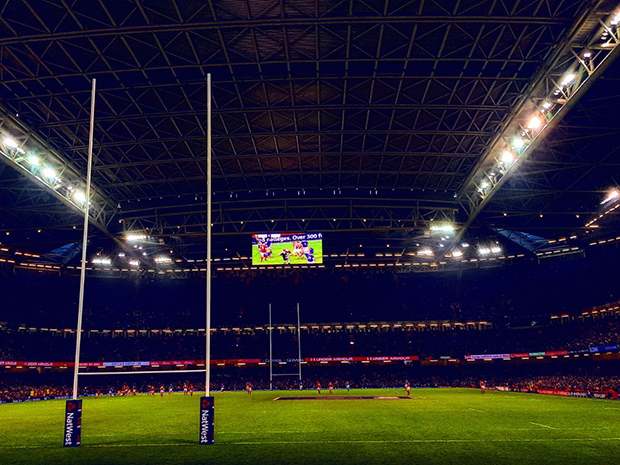 Wales take on Italy at the Principality Stadium.

A BONUS POINT victory over Italy was enough for Wales to go second in the Six Nations table.

Wales leapfrogged England and Scotland after a comfortable 38-14 win over the Azzurri on Sunday.

England’s 22-16 loss away to France and Ireland’s 28-8 win over Scotland means that although the race for the title is over, the race for second place is more open than ever.

Another bonus point win against France would mean Wales finish in second place this ‘Super Saturday’, where all six teams face off on the same day.

Wales have already collected three bonus points from their last four matches, one reason for their high standing in the table at the moment.

The game against Italy couldn’t have started better for Wales, who ran in two tries in less than six minutes.

The first came from man of the match Hadley Parkes, as the New Zealand born centre twisted out of a head-injury inducing tackle by Tommaso Castello to score. George North doubled the score minutes later when centre Owen Watkin intercepted poor Italian passing, ran 70 metres and handed it to the winger to finish.

However, the Italians touched down before the ten-minute mark after some nimble footwork carried fullback Matteo Minozzi past a poor Welsh defence into the corner.

A testy first half ensued, especially with Liam Williams being sent off just before half time for a high tackle on opposite number Minozzi.

Lock Cory Hill’s early second half try helped calm Welsh nerves and widened the gap between hosts and visitors, before a deliberate knock on by scrum-half Gareth Davies reduced them to 13 men.

North’s second try of the game was enough to stop a late Italian try being anything but a consolation.

It may have been a comfortable win in the end but Wales will look to reduce their penalty count considerably when they face France. They conceded the same number of penalties, nine, as in Dublin. Wales gave away double the amount of penalties in their last two matches as in their opening two.

The yellow cards must also stay in the referee’s pocket. After being substituted for Leigh Halfpenny rather than brought back on, Liam Williams will be cautious if he is called back up to play on Saturday, along with the rest of the Welsh team.

Wales had the dragon’s share of possession (62%) and territory (63%) against Italy, and will hope to carry that through to their game against Les Bleus.

They go up against a French team buoyant off the back of their first Six Nations victory over England since 2014, but a team who will be without skipper Guilhem Guirado.

France’s victory came as much through England’s poor performance as it did through occasional French flair. Their penalty count, 10, was dwarfed only by England’s 16.

France’s line-out was also poor, losing five, an area Wales can focus on if they want to make metres and score tries.

Wales, England, France and Scotland have all won two, lost two so far, and the results of ‘Super Saturday’ could mix up the table completely yet again. A sold out home crowd could be what Wales need to cling onto their position in the table.

The inclusion of bonus points in the Six Nations championship, for better or worse, has proved crucial for the Welsh team. On Saturday, they need one more with a win.