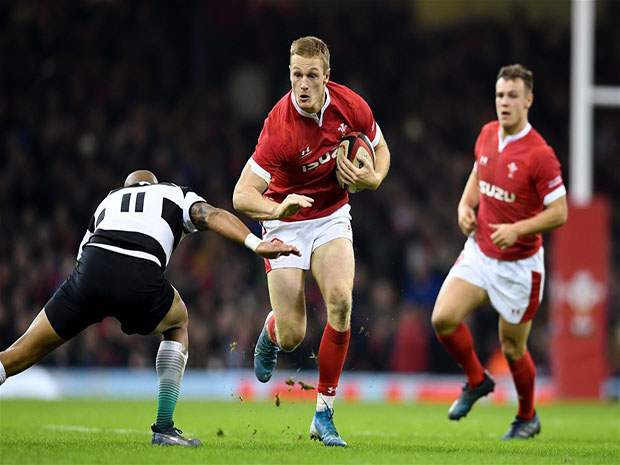 And what can we expect to see from the other nations in this year’s competition?

AFTER a successful 2019 campaign, the reigning Grand Slam champions are heading into this year’s Six Nations with a huge amount of expectation.

Wayne Pivac and his new coaching team, including Cardiff legends Martyn Williams, Jonathan Humphreys and Sam Warburton, will look to build on the successes of the Warren Gatland era.

Pivac is expected to emphasise an attacking game that some felt Gatland’s teams were lacking. If true, this will be welcomed by Welsh rugby purists.

Wales fans will be encouraged by the form shown by key players in recent times.

Playmaker Dan Biggar looked like he has added an extra attacking dimension to his game at Northampton.

There are some welcome additions to the squad, with uncapped players such as Nick Tompkins, WilGriff John, Johnny McNicholl, Louis Rees-Zammit and Will Rowlands each looking to stake a place in the first team.

Penarth-born teenager Rees-Zammit has been a revelation for Gloucester in recent weeks, with some tipping him to feature against Italy on Saturday.

McNicholl will likely go straight into the starting line-up now that he has finally qualified on residency for Wales after many years of sterling service for the Scarlets.

Wales are also welcoming Rhys Webb back into the international fold after his years of exile at Toulon. But he’s not guaranteed a place in the squad, such is the quality of scrum halves Gareth Davies and Tomos Williams.

Fan-favourite loosehead prop Rob Evans is back in the side after being passed over for the World Cup. He will have a huge task to get back into the team ahead of Wyn Jones.

There have been injury concerns for Pivac with influential outside centre Jonathan Davies out of the tournament with a knee injury.

George North and Josh Adams have been touted to make a positional switch to 13 to compensate for this, but the addition of Tompkins to the squad could make this unnecessary.

Davies will feature on screens during the tournament, but as a pundit for the BBC.

Fly halves Gareth Anscombe and Rhys Patchell are also injured. Young Cardiff Blues number 10 Jarrod Evans will try to make the best of this after narrowly missing out on a place in the World Cup squad.

Fly half and centre Owen Williams has been recalled to the squad following his injury, narrowly beating Sam Davies to the final number 10 berth.

Blues winger Owen Lane was released from the squad due to a hamstring injury sustained in training. There has been no replacement called up at this point and no sign that the coaching team are considering doing so.

Liam Williams will miss the game against Italy on Saturday as he recovers from the ankle injury he received during the World Cup.

Despite the injuries, Wales have enough depth in the back three to get through the first few games.

Italy will be led into this year’s Six Nations by interim coach Franco Smith following the departure of Conor O’Shea.

Since their tournament debut in 2000, Italy have been viewed as the weakest team and have not won a game in the Six Nations since 2015 – a 22-19 away win against Scotland.

However, they should not be treated as pushovers. They have some dangerous players in the team, most notably Wasps full back Matteo Minozzi.

This will be veteran number 8 Sergio Parisse’s final Six Nations. He has played his last game against Wales already, with Italy’s highest capped player ever only set to feature in the Azzurri’s home games.

Ireland had a disappointing World Cup after being tipped to be among the chief contenders.

Joe Schmidt left the role of head coach after the showpiece in Japan, with ex-England international and coach Andy Farrell taking charge.

He has added another ex-England player to his coaching staff in Mike Catt.

Rory Best has retired, with key man Jonny Sexton stepping up to replace him as the leader of the team.

Wales should be wary of the form of the Irish provinces, with Leinster seeming nigh on unstoppable this season. The majority of the Irish squad will be made up from the Dublin-based team.

France may be the dark horses of the tournament.

Only narrowly losing to Wales in the quarter finals (mainly due to a moment of madness from second row Sebastien Vahaamahina), they have proven that they are still a force to be reckoned with.

The French U20 team have been crowned World champions for the last two years. Fly Half Louis Carbonel was a huge part in the last victory and will be a player to keep an eye on.

Former Wales defence coach Shaun Edwards has joined Les Bleus in the same role he had for Wales. He will be aiming to transform an often-inconsistent French defence into something to be feared by the opposition.

England are seen by many as the team to beat after making it all the way to the final of the World Cup.

They are one of two teams in the Six Nations who have the same coach as they did at last year’s tournament, which could give them greater stability.

Billy Vunipola is out of the tournament but sounds from Eddie Jones’ camp suggest that England will still try to be as physical as possible.

They will be looking to get revenge against a Wales side that thoroughly out-thought them in last season’s Six Nations.

Scotland will be without talismanic scrum half Greig Laidlaw after he retired from international rugby following their defeat to Japan at the World Cup.

A team that has never beaten Wales at the Principality Stadium will be without Fly-Half Finn Russell who left the squad following his breaking of protocol during a drinking session and subsequent absence from training.

Even without the two half backs, Scotland will be a force to be reckoned with. Stuart Hogg has been made captain and the full back will look to punish teams on the counterattack.