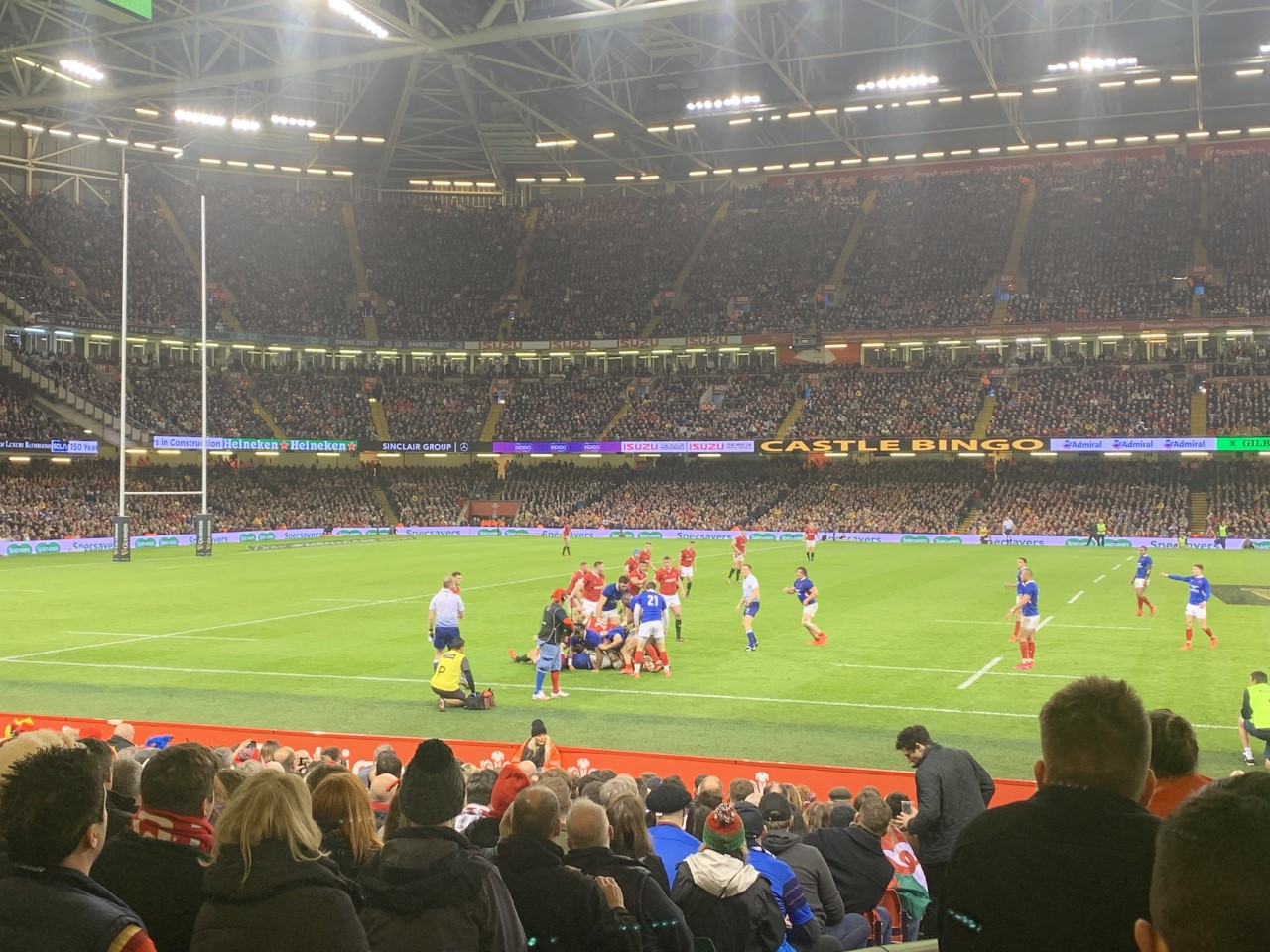 WALES saw their hopes of retaining their Six Nations title dashed as they were beaten 23-27 by a resilient French side at the Principality Stadium.

Inspired by Shaun Edwards on his return to Cardiff, a disciplined defensive performance, together with an 18-point haul from fly-half Romain Ntamack, saw France lead for most of the game.

Tries from Dillon Lewis and Dan Biggar kept Wayne Pivac’s side in with a fighting chance, but they were ultimately not enough to prevent a first Welsh home defeat in the tournament for three years.

Wales were left aggrieved as a second-half decision regarding a potential penalty try went against them. Referee Matthew Carley deemed Paul Willemse’s tackle on Ken Owens – in which he knocked the ball out of the Welsh hooker’s hands – to be legal.

It was a big moment in what was a frustrating evening for Wales, and, after the game, head coach Pivac suggested it was the incorrect call.

“There were quite a few key moments,” he said. “The slapdown, the officials may have got that one wrong.

“Having said that, we scrambled very well and showed a lot of character to come back at the end with players playing out of position.”

After sealing their first win in Cardiff since 2010, France will now be daring to dream of a Grand Slam, while Wales are faced with the very real possibility of a bottom-half finish.

It was the hosts that moved into an early lead, however, as the trusty boot of Dan Biggar got Wales on the board after four minutes.

However, moments later, France scored the first try of the game in very fortunate circumstances, as Leigh Halfpenny spilled a high ball under pressure, only for it to fall directly into the path of Anthony Bouthier just inside the Welsh half.

The French full-back gratefully scooped the ball up and raced down the left flank, before taking it under the posts to score, with Ntamack adding the conversion.

Things were to get worse for Wales, as George North was left lying motionless on the Principality turf following a sickening clash with counterpart Gael Fickou after 11 minutes played.

After failing a head injury assessment, North was permanently replaced by Johnny McNicholl.

Despite these early setbacks, Wales began to grow into the game towards the end of the first quarter, and may have scored had the flying Josh Adams been able to have kept Dan Biggar’s searching kick under control as he advanced towards the try-line.

Wave after wave of Welsh pressure ultimately came to nothing and, after both sides traded penalties, it was France that crossed the whitewash next, with Fickou dotting down, only for it to be chalked off for a forward pass.

However, just two minutes later, there was to be no second mistake for France as lock Paul Willemse bounced off McNicholl and crossed in the corner after some smart work off the back of a lineout.

Wales responded through a third Biggar penalty, but desperately needed a try.

After French No 8 Gregory Alldritt was sent to the sin bin after serial reoffending, Welsh captain Alun Wyn Jones opted to go for a try rather than another three points, a move backed by the home crowd.

However, his side’s attempts came to nothing, and a frustrating end to an even more frustrating half saw Wales go into the break 9-17 down.

After starting the second half how they ended the first, Wales finally got over the line through the unlikely figure of Dillon Lewis, who scored his first international try for Biggar to convert.

Things were looking up for all of four minutes, with Nick Tompkins suffering a nightmare moment as his pass was intercepted by Ntamack on the halfway line as he looked to set up another Welsh attack.

Probably his side’s biggest attacking threat throughout the first half, Tompkins could only watch on in horror as Ntamack ran the length of the half to touch down and re-establish a firm French lead.

As the French fly-half got on the board again with another penalty, Pivac made a number of changes, with Tomos Williams, Rob Evans, Aaron Wainwright and Will Rowlands all entering the fray.

Ken Owens would also make way for Ryan Elias, but not until he had been the victim of a highly contentious refereeing decision.

After another Welsh surge forward, the ball fell to Owens on the wing, and the hooker looked to offload to Josh Adams to set up a certain try, only for him to lose possession courtesy of Willemse.

The French lock certainly looked to have purposely knocked the ball down and out of Owens’ grasp, but referee Carley stuck with the decision of his assistant that it was just a knock-on.

There was still time for another French dismissal however, as prop Mohamed Haouas was carded for scrummaging offences, and Wales found themselves camped deep inside the visitor’s half.

This spell of pressure ultimately paid off through Pivac’s replacements, as 6ft 7in Will Rowlands broke through the French line to set up an attack.

Elias and Wainwright linked up well on the right wing, before Dan Biggar crossed and converted to set up an anxious final five minutes.

However, despite Matthieu Jalibert missing a penalty for France in the 78th minute, Wales just couldn’t get over the line, with Tompkins’ late break for glory snuffed out as the clock went red. 