Plaid Cymru leader, Leanne Wood, has launched an attacked on UKIP, calling for an end to “damaging Europhobia” in UK politics.

Speaking today (Friday) at her party’s spring conference in the Mercure Hotel on Cardiff’s Newport Road, Ms Wood spoke of her concerns that Wales’ voice would not be heard in the European Parliament elections in May.

“Do not forget what is at stake at this election,” she said. “Do not forget all that will be put at risk if dangerous right-wing isolationist Europhobia is victorious.

“A vote for UKIP is a vote against Wales,” she continued. “A vote against the Welsh National interest. We cannot and will not let their ugly politics divide us in May.”

The European Parliament elections are a definite focus of Plaid Cymru’s spring conference, with particular emphasis upon the optimism surrounding Jill Evans MEP’s campaign. Despite this, it appears that Plaid will have to work hard to achieve a positive result in the 2014 elections.

Analysis of last month’s YouGov poll by Cardiff University’s Professor Roger Scully indicated that, of the four seats available for Wales, two will go to Labour, one will go to the Conservatives and one will go to UKIP.

Head of Plaid’s Cardiff Group, Neil McEvoy, said “It means we’ve got a job to do. Winning elections is not rocket science. It doesn’t depend on events or luck or a host of other things, it depends on what we do as a party and what our activists do.” 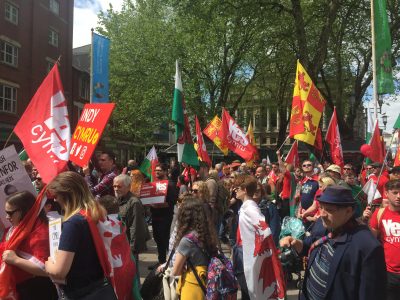