The Bread Stall at Cardiff market has taken orders for 7,000 Welsh cakes from local schools and businesses.

200,000 daffodils and thousand of Welsh cakes will flood Cardiff with colourful sweetness ahead of St David’s Day celebrations on Sunday.

Welsh cakes and daffodils, Wales’s flower, are the two traditional symbols of the anniversary of Wales’s patron saint’s death on 1 March 588, a date still debated by historians. Craig Morris, the flower delivery man from the Cardiff-based wholesale company Peter Broughton, said: “We have already ordered 20,000 bunches of daffodils, each bunch holding 10 flowers, which will be delivered by loads of 8,000 until Sunday. On a regular week, we only order about 4,000.

“To sale them all won’t be a problem at all and we will probably have to order some more later this week.”

Peter Broughton’s daffodils travel hundreds of miles from flower farms in Cornwall and Jersey to take part in St David’s Day celebrations and will be sold to fruit and veg and flower shops across Cardiff.

Kelly Bridgeman, who runs the flower shop The Secret Garden at Cardiff central market with her sister, said: “ It is usually very busy on the day and people buy exclusively daffodils. St David’s Day has really become an event for children in schools apart from the traditional welsh cakes and daffodils.

“I have already ordered a big box of them for Sunday. I haven’t counted exactly, but I think that’s over 100 bunches and I know they will all go.”

The daffodil is the national Welsh flower and is worn on St David’s Day.

It is traditional for people to wear a daffodil or a leek on their coat or jacket, and though daffodils are today more common, they were usually worn by women while men wore the leek. Once daffodils are decorating the table, a plate of lukewarm Welsh cakes are shared between families and friends to complete the celebrations.

Kelly Flay, who co manages The Bread Stall at Cardiff central market, a family-run business of over 50 years old, has already taken orders for 7,000 welsh cakes for schools, businesses and organisations ahead of Sunday’s celebrations.

“We usually sale a huge amount of Welsh cakes in the running up to St David’s Day, I couldn’t give you an exact number because we usually lose count.

The Bread Stall at Cardiff market has been making fresh break and cakes for over 50 years.

“But is not as busy as it used to be and this year St David’s Day is on a Sunday and we don’t open on Sundays, so sales are likely to be less than in previous years.”

Karen Jones, manager of the Fabulous Welsh Cakes shop on Bute Street, said: “We usually have 1,500 welsh cakes on sale in the shop. We should be making about one and a half time that amount this weekend. We also supply a number of hotels in Cardiff including St David’s Hotel, the Holland House Hotel and the Angel Hotel and we will almost double our delivery to them.”

All of Fabulous Welsh Cakes’ confectionery are hand-made, using local produce and dairy from Caerphilly, by a team of five people in the shop’s kitchen.

St David is said to have died on 1 March 588 and is celebrated as a national hero of the Welsh resistance against Norman attacks. In 2007, Tony Blair rejected a cross-party petition to make St David’s Day a bank holiday.

Your guide to St David’s Day celebrations in Cardiff can be found here. 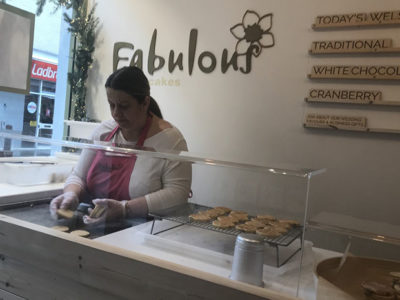