INDEPENDENT shops will benefit from millions of pounds of investment to increase the footfall in the historic city centre arcades.

The three Victorian arcades, Duke Arcade, High Street Arcade and Castle Arcade will be revamped with millions of pounds by the estate agent Savills, which manages the Castle Quarter on behalf of the owner Mansford Core.

Works on the roofs are planned after water leaked into the arcades, and the floor, lighting and shop entrances will be refurbished. New signage will also be installed in the city centre directing to the arcades. So far, the 1900s cabling has been replaced with modern wires.

The estate company is also working in collaboration with Katherine Jones from Cardiff School of Art and Design to create a website to promote the businesses and the pop-up events the company wants to organise.

Andrew Phillips, from Savills, said: “The Castle Quarter offers some of the most important historical features in the city centre and is part of the unique charm of Cardiff as a destination. This is a 10 year plan to get these arcades back on the map and raise awareness about what is in the arcades and make it a destination for people to come and explore.

Since last summer, a few new independent businesses have opened shops in the arcades, all managed by young and innovative entrepreneurs. Among them, The Boardroom Coffee, owned by Caroline Nieuwenhuis, is opening tomorrow and will serve freshly roasted coffee in a venue themed around “skate and surf”, which welcomes all.

Carly Karran, manager of the Science Cream which was launched in July, explained how quiet the three first months of the year have been and how despite positive feedback, it is a tough battle to break even.

“You really have to be a destination business in the arcades and make sure people come in for you. The social media campaign, Savills, is starting will really help that” she said.

The historic arcades a key feature of Cardiff’s city centre

Harriett Davies, manager of the New York Deli in the High Street Arcade, is celebrating her business’s 25th anniversary on April 7 and has seen the arcades being transformed throughout the years. She said: “The problem [significant fall in footfall] we have had since they did Saint David’s Two has come away a little bit, people were curious to go but realised it was just a shopping mall. But we are the heart and soul of the city.

“Cardiff is a great city for its independent thinking, it’s cosmopolitan and very au fait. People want Cardiff to be different and this is what we want it to be – it’s just hard to get there.”

Cardiff Council has not commented on the issue but Mr Phillips pointed out the council had been very supportive of their project. The investment group Mansford Core bought the Duke Arcade, the High Street Arcade and the Castle Arcade for £25 million in July 2014. 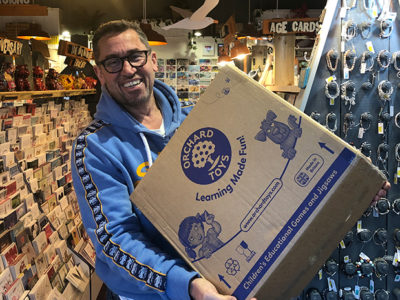