SCORES of Caerau residents attended a meeting to discuss their concerns about a proposed landfill site in the area.

Residents were urged by a councillor to write letters to a variety of organisations to put their objection on record at the meeting on Thursday.

A planning application has been submitted to the Vale of Glamorgan Council on behalf of Emear Limited to fill the old brickwork site with ‘inert waste’ to reconnect the two sides of Caerau Wood.

The waste would not decompose and is not biologically or chemically reactive. Residents at the meeting were firmly against the use of Cwrt-Yr-Ala road for access, with most also expressing concern at the nature of the site itself.

Fairwater councillor and Cardiff West AM candidate Neil McEvoy, who organised the meeting at Ysgol Nant Caerau, said: “These campaigns have been shown to work in the past.

“I would urge residents to object to the Vale of Glamorgan directly and also put pressure on Cardiff City Council to oppose the plan.”

He argued that the automatic traffic counter was placed past the turning for Heritage Drive and was not representative of the real levels of traffic on Cwrt-Yr-Ala road.

The current land surrounding Caerau Wood with the A4232 bottom left

How the land would look after the development. Caerau Wood would be reconnected

Many at the meeting spoke of their fears about safety on the road if lorries are allowed to access the landfill as proposed.

Mary Farleigh, of Lauriston Road, said: “I’m worried about all the children that play on that road. If there’s going to be a load of lorries forcing their way down there then it’s not going to be safe anymore.

“I think the Vale are trying to steamroller us. They couldn’t even be bothered to inform us.”

Most residents were only alerted to the proposal after Mr McEvoy had organised the meeting.

A discussion also took place about Cardiff Council’s role in the application. Mr McEvoy asked Councillor Peter Bradbury to put pressure on his colleagues to get a formal objection to the plan from Cardiff.

Mr Bradbury said: “There are sound planning reasons to object to this proposal. We are vehemently opposed to this site and I would encourage all residents to get in touch with the Vale planning team.

“I am pushing transport officers very hard for my constituents, but it is not Cardiff Council making this decision. It is the Vale’s planning committee.”

Caerau resident Andrea Meredith, of St Mary’s Court, said: “The first I knew of this plan was when Mr McEvoy knocked on my door yesterday. I think the councils should work together more and let us all know what’s happening.”

Speaking after the meeting, Mr McEvoy said: “I was impressed with the community of Caerau coming together to fight the landfill site. The ball is in Cardiff Council’s court now. They must object.”

Following the meeting, both councillors and residents confirmed their action points. One of these was to set up a site meeting with Cardiff’s Highways Department, the Vale and the developer.

Mr McEvoy stressed the need to petition Cardiff Council to object on behalf of the residents. While Mr Bradbury pointed to sound planning reasons as the route to opposing the site. 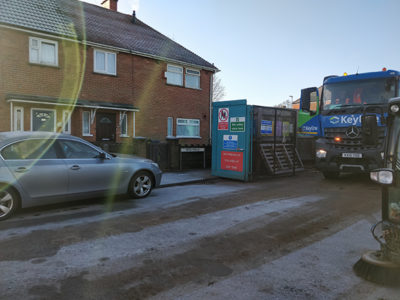