A CAMPAIGN to encourage staff, visitors and patients to stop smoking outside hospitals in Cardiff and the Vale has been launched.

The Tobacco 20 Challenge, which gives people 20 ideas designed to get rid hospitals of smoke in 20 days, was launched on March 9 – National No Smoking Day.

The challenge, which was launched by Cardiff and Vale University Health Board, aims to protect people from second-hand smoke, prevent littering and persuade people to give up altogether.

Among the challenges staff can choose from are offering to help patients stop smoking, informing patients and visitors of the non-smoking policy and engaging on social media.

The University Hospital of Wales (UHW) has been a non-smoking premises since October 2013. Staff members have been patrolling the site and helping to clean up the premises and promote the challenge.

Joanne Richards, a speech and language therapist, said: “In support of Tobacco 20 I pledged to refer a family member to our smoking cessation service as I have seen first-hand how difficult it is to stop smoking without help.”

In Cardiff and the Vale, 80% of people do not smoke. Cardiff is below the national average of 21% of the population who smoke.

Trina Nealon, head of health promotion, said: “Hospitals are where people come to get better. Smoking on site exposes our staff, visitors and patients – including those who are seriously ill – to poisonous smoke that poses a real risk to their health.”

The drive is part of a wider Welsh Government target to reduce the smoking rate to 16% by 2020. With two No Smoking Enforcement Officers expected to be in post by the end of March, it is anticipated that the UHB will soon be smoke-free.

cardiff, Hospitals, smoking, UHB, University Health Board, Vale of Glamorgan
You may also like 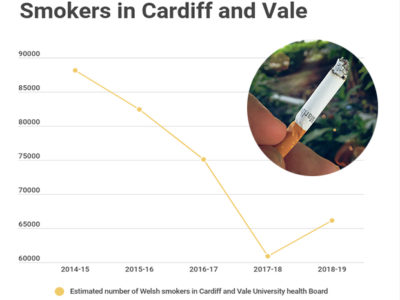