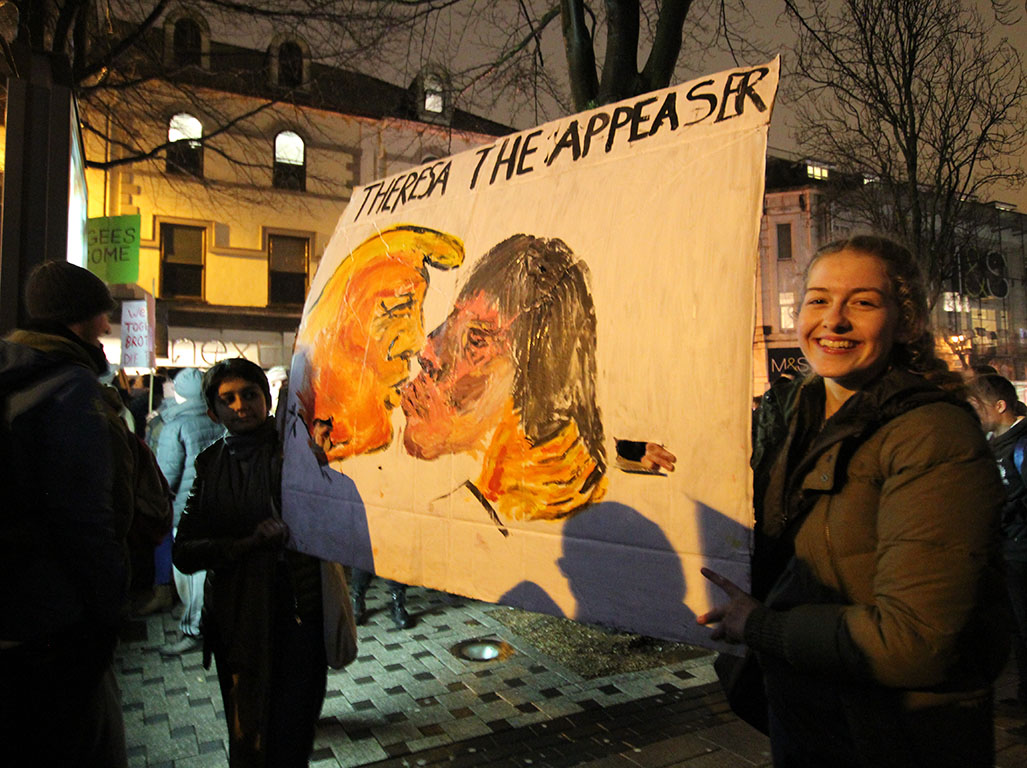 The crowd gathered under the statue of Aneurin Bevan just before 7pm, mirroring demonstrations across the country in cities such as Manchester, Glasgow, Edinburgh and London.

The Prime Minister had visited Cardiff City Hall earlier in the day to hold talks with leaders of the devolved nations to discuss the terms of the UK’s Brexit deal. As Theresa May, David Davis, and Liam Fox exited City Hall in the afternoon, demonstrators could be heard shouting: “Theresa the Appeaser” and “Shame on you”.

By the time the demonstration began, a petition calling for the government to withdraw their invitation to Donald Trump for an official state visit to the UK had gained more than 1.5 million signatures.

The demonstration began at the top of Queen Street with protesters displaying placards, chanting and listening to speakers and then marching down the length of the street  and back.

Vaishnavi Sayal, an international student from India, spoke to the crowd over a megaphone. Ms Sayal addressed Donald Trump directly: “We have seen what war has left our elder generations and if you, after all of that, think that you can wake up one day, sign a document and say that someone is illegal then you, along with other politicians, do not have the right to call yourself a world leader.

In her speech the event’s organiser Ash Cox thanked the crowd and stressed the importance of challenging world leaders on discriminatory policies: “I am not affected by Trump’s ban on Muslims. But I am someone of a Jewish background, I’m gay, and my family in America are overwhelmingly targeted by Trump’s policies.

“I know that this is something that we cannot abide and I thank you so much for coming out here.” Steve Gauci came to the demonstration street after work

Steve Gauci, 58, from St Mellons, came to the demonstration after finishing work. He said: “The guys only been in the post just over a week and the damage he has caused already is tremendous. You get to the stage where you turn on the news and you wonder what mayhem he’s going to cause next.

“I reckon she [Theresa May] should ban him coming here. He’s got no place here.”

Dorian Pannarale, 34, originally from Los Angeles, California, has been living in Cardiff for four years and attended the protest with her son Samuel, 13. Dorian Pannarale and her son Samuel gathering on Queen Street

Ms Pannarale said of the executive order: “I think it’s ridiculous and it goes against the very fabric of what it is to be and represent America. It’s a national embarrassment, it’s an evisceration of rights and it doesn’t represent what our country wants.

“I think what the representation in America fails to understand is that they represent the people and I think similarly so has Theresa May. So instead of being a pawn in Trump’s new world domination game she should listen to her people, and her people are here and now saying that this is wrong.”