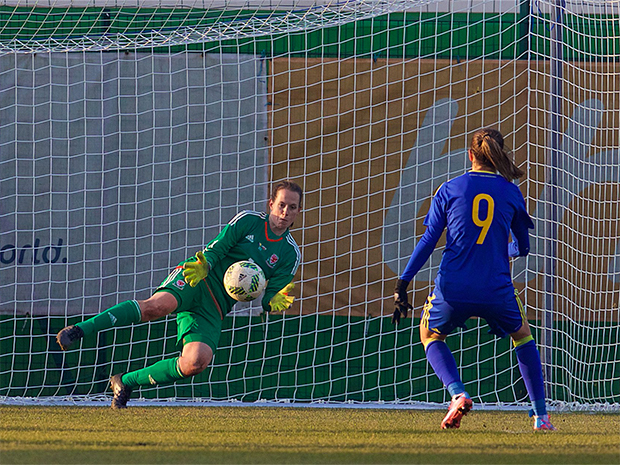 Goalkeeper Laura O’Sullivan makes the vital penalty save against Bosnia and Herzegovina.

WALES’ women are four points clear on top of their World Cup qualifying group after Laura O’Sullivan saved a penalty in today’s win away in Bosnia.

Kayleigh Green’s 58th minute goal was the difference in a tense match which saw Wales extend their lead at the top of their group.

Wales went into this important qualifier only one point ahead of home nation rivals England, having won two and drawn one match so far in their campaign.

But they started the brighter of the two sides, with Natasha Harding volleying over from a tight angle after Rachel Rowe battled well in the box.

Bosnia replied well and forced an athletic save from Laura O’Sullivan, as Kameric turned well on the edge of the box.

The home side’s first real threat came in the 35th minute when good interplay in the midfield allowed Kullis acres of space, but she could only put her shot wide.

Wales’ best chance of the half came two minutes later as Jess Fishlock fought her way through the Bosnian defence to give herself a chance to shoot, but Hodzic in the Bosnian goal was equal to it.

The Reds began to control the game in the last 10 minutes of the half, creating problems for their opponents.

Centre-back Hasanbegovic almost put the ball in her own net and from the ensuing corner Wales had a good appeal for a penalty waved away, as Rachel Rowe seemed to be tripped inside the box.

Wales broke the deadlock in the second half where a hopeful ball from the back split the home defence and Kayleigh Green latched onto it to slot home calmly past the onrushing goalkeeper.

The away team defended well as Bosnia piled forward. Laura O’Sullivan dealt with an onslaught of long balls and crosses well.

O’Sullivan was again called into action after Kameric was deemed to have been fouled inside the box. Despite Welsh protests the Bulgarian referee pointed to the spot where Bosnian captain Nikolic stepped up.

But her tame attempt was smothered by O’Sullivan before being thumped away.

The keeper’s day was not quite over as she was forced into another brilliant save from Nikolic’s close range header.

The Welsh bench piled onto the pitch at the full time whistle, showing how important this game was for the squad.

Wales now go into their next qualifier against England on top of their group and will look to try and confirm themselves as real qualification candidates.