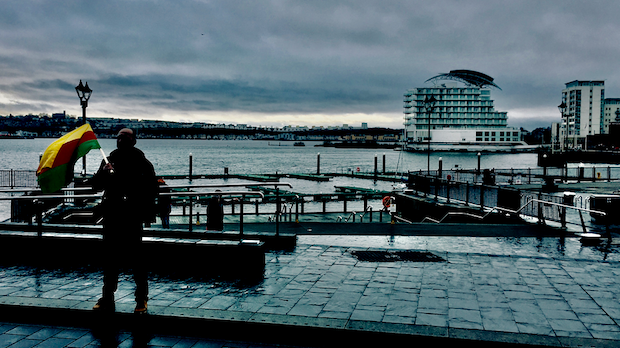 MEMBERS of Cardiff’s Kurdish community endured the rain today to protest at Turkey’s bombing of Afrin.

More than 100 people turned out on the steps of the Senedd. Also present was the Independent Plaid Cymru AM, Neil McEvoy.

Kurds are the second largest ethnic group in the Middle East, with 40 million living across Iran, Iraq, Syria, and Turkey.

Around 4,000 Kurds live in Cardiff. Many came to escape the Syrian Civil War, which Turkey is using to clamp down on the Kurdish independence movement. Fares Khalaf stands defiantly with the flag of his homeland

Imam Sis is among them. Originally from Turkey, he has lived in Newport for nearly five years.

“In the Middle East, we don’t expect the West to help. They’ve always come down on the side of the Turkish state since 1923 [the date of its foundation],” he explains.

The British Government is wary of condemning Turkish military action against the Kurds because of Turkey’s importance as a regional bulwark against terrorism.

“The Turkish state doesn’t let you have any political rights if you’re a Kurd. We’re oppressed and no-one seems to care,” adds Sis.

Roja Leily is a Syrian Kurd. She says: “No matter which part of the region you’re from, we’re here to get make our voices heard.

“To the people of Cardiff, we say: Listen to our voices.”