Your guide to visiting Cardiff for the Six Nations 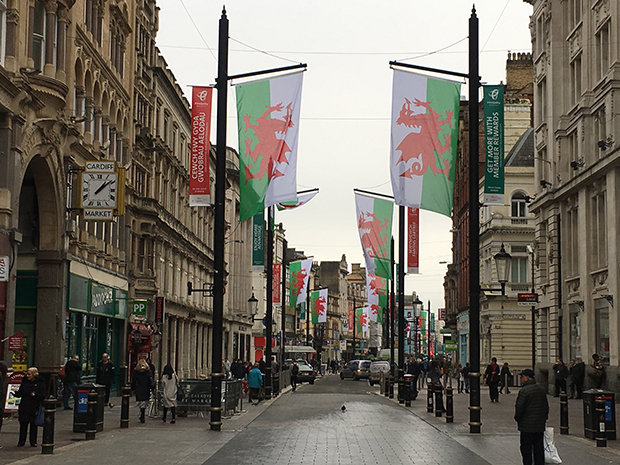 IT’S that time of year again. Cardiff is readying itself for the return of the Six Nations. But what should fans do in the city before Wales’ opening game with Scotland this weekend?

When looking for a pre-game bite to eat, you will want to be in the centre of town to soak up the atmosphere. Cardiff really comes to life on match days, and anywhere along St Mary’s Street is guaranteed to provide the atmosphere you seek. The view of the Principality Stadium from outside the City Arms.

The Prince of Wales and The Gatekeeper offer reasonably priced pub food within a stone’s throw of the Principality Stadium, and the City Arms is another option just across the road from the ground. Gareth Bale’s Elevens Bar & Grill is one of the hotspots for sporting events in Cardiff.

If you are looking to eat in a sporty environment, head to Gareth Bale’s sports bar Elevens Bar and Grill. Situated on Castle Street, just opposite Cardiff Castle, Elevens is only a few minutes from the stadium, and is decorated with all sorts of sporting memorabilia. Rummer Tavern is one of Cardiff’s oldest pubs, and offers a more traditional setting to your pre-match get together

To ease the congestion, Cardiff Council has organised Park and Rides across the city.

One is at Cardiff City Stadium in Leckwith. This will cost £10 on the day, or £8 if you pre-book. This can be accessed from junction 33 off the M4 and then by following signs to Leckwith Road. The first bus will leave at 9am. The final bus will leave the pick-up point, Tresillian Way North, behind Cardiff Central Station at 6.30pm, with the car park closing at 7pm.

The Principality Stadium is just a 20-minute walk away from this car park, and you will also be covered for food. There is a McDonald’s, a KFC and a pub, The Sand Martin, all outside Cardiff City Stadium.

Another event day Park and Ride is open at Sophia Gardens, half a mile from the stadium.

This is just outside the SWALEC Stadium, so will be easy to find. The easiest way to get there is to exit junction 32 of M4 and follow the signs for the SWALEC Stadium. It costs £15 and is open from 8am until midnight.

Situated just outside Bute Park, you could go for a walk along the River Taff before the game, weather dependent of course, and those who are not drinking could stop off in Pettigrew Tea Rooms for a pre-game refreshment.

Sophia Gardens is about 10 minutes walk from the Principality Stadium, and a similar distance to the city centre.

Disabled fans are advised to use Sophia Gardens.

There is also parking around Cardiff University, at King Edward VII Avenue, where a day ticket costs £12.

An option that may interest those visiting Cardiff for the first time is parking at Cardiff Bay. There are a number of car parks available and a wide range of places to eat. Everything from Subway and Nandos to Pizza Express and Las Iguanas.

While at the Bay, be sure to check out the Wales Millenium Centre, the Senedd and the shrine to Torchwood character Ianto Jones.

If you are looking to take in some traditional Welsh cuisine, you can’t go far wrong with trying  some Welsh cakes from Fabulous Welshcakes.

The Bay is a 30-minute walk from the Principality Stadium, but you can catch a four minute train from Cardiff Bay Station to Queens Street, which costs £2.10, and then walk through the city centre to the stadium.

cardiff, Days out, food and drink, matchday, rugby, six nations
You may also like