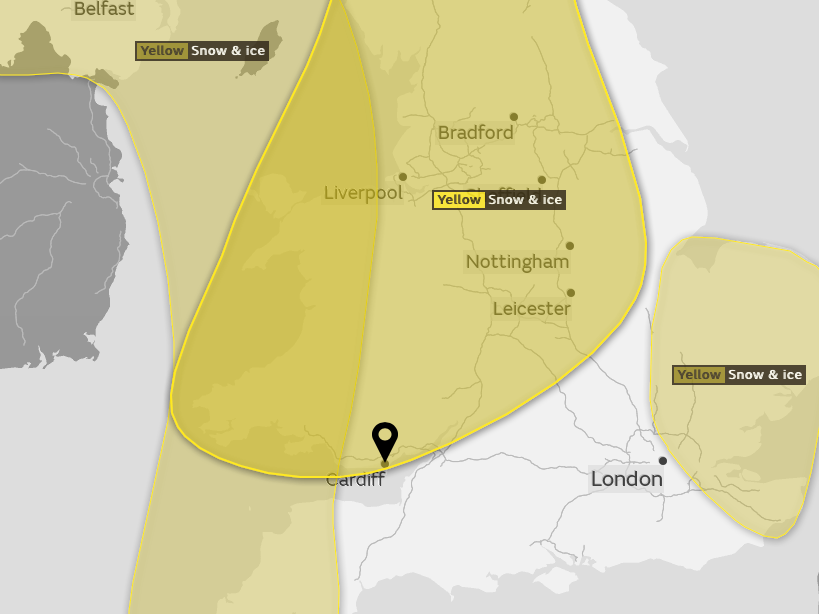 TEMPERATURES will barely get above freezing today across the UK, according to Met Office forecaster Alex Deakin. The Met Office has extended a yellow severe weather warning for snow and ice across the south east until 3pm today.

But what does it mean for Cardiff?

A spell of sleet and snow is moving across Wales this morning but will gradually weaken through the day.

The Met Office have issued a YELLOW warning for snow and ice until 3pm today. Some roads and railways may be affected with longer journey times by road, bus and train services.

As rain, sleet and snow clears, ice may form on some untreated roads, pavements and cycle paths.

Temperatures will dip further tonight – and could sink as low as -11C in parts of Scotland and northern England.

The forecast for Wednesday, February 7

The chief forecaster at the Met Office predicts further showers of snow, sleet and hail will affect western parts of the UK, including Wales, overnight and through tomorrow.

Showers will gradually fade overnight and into Wednesday, with icy stretches developing as skies clear, particularly where earlier snow has partly melted.

A separate yellow warning has been issued for much of Wales for tomorrow until 10am. However, this does not extend to Cardiff.

Cardiff commuters are advised to take extra care as they travel to work on Wednesday morning. Further information and advice can be found here.

cardiff, Met Office, weather, weather warning
You may also like