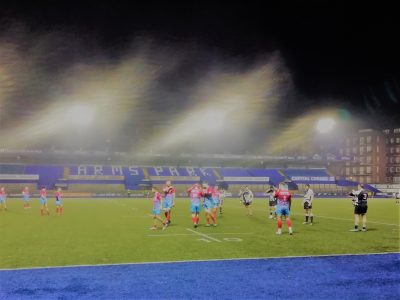 The home side comfortably beat Bedwas last month but Sankala’s men are unbeaten since then and will be seeking to avenge their two defeats to Cardiff this season.

HIGH-FLYING Cardiff RFC can take their impressive campaign one step further with defeat of Bedwas in the National Cup tomorrow.

The Blue and Blacks, who are second in the Principality Premiership, find themselves only two points behind leaders Merthyr, and also have the chance to make their first semi-final of the National Cup since 2010.

Having not lifted the trophy since 1997, Cardiff host a Bedwas side who are unbeaten in their last three and are starting to show the type of form that certainly does not reflect their league standing.

Stefan Sankala’s men have found themselves drawn into a relegation dog fight but recent momentum has pulled them eight points clear of relegation rivals Llanelli – although the fellow strugglers do have two games in hand to make up this difference.

The away side’s last defeat was at the Arms Park last month in a game of two halves.

Cardiff had raced into a 21-0 defeat in the first 20 minutes, but by the break their opponents had managed to pull the game back to 21-12.

A second half masterclass from the home side however propelled Williams’ men to a 35-17 defeat piling further pressure on relegation-battlers Bedwas.

Since then, Sankala’s men have won all three of their crucial relegation ties  and will see themselves as the perfect team to halt Cardiff’s drive as they seek to avenge the two defeats they have suffered to Williams’ men this season.

The Blue and Blacks have not lost a game since December to Ebbw Vale and are unbeaten in their last 11 in all competitions.

The home side may have had two weeks off but manager Iestyn Williams told The Cardiffian that Bedwas were a side not to be underestimated.

He said: “Bedwas are fighting for their lives but have picked up a bit of form. Any team at this stage is a tough game and cup games are a one-off.”

The Cardiffian also asked the man at the helm about their title chances as they look to stop Merthyr winning their third consecutive Premiership success.

He said: “We probably lost a couple of bonus points against Bridgend and Swansea but as I say they are bonus points and we do have seven games left so there is still a chance to catch up.”

“We’re not talking about the title though. We take it game by game, we can’t look further than Saturday.”