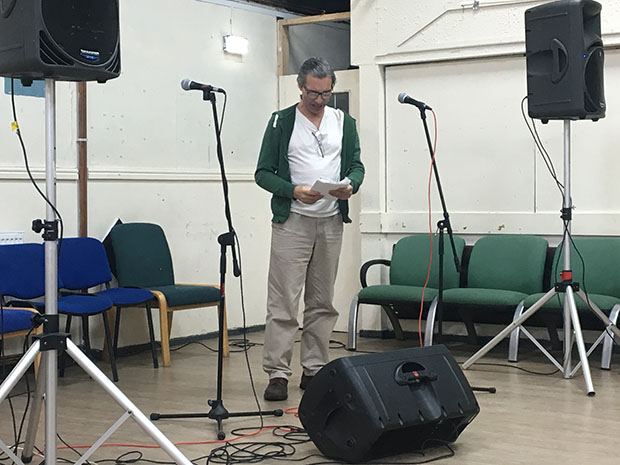 MaDCaff hosted its first event in Cardiff in July

A “PRESSURE-FREE” open-mic event for performers affected by mental illness returned to Cardiff.

The event, MaDCaff, was held at Cathays Community Centre and organised by Disability Arts Cymru.

It aims to give those affected by mental illness a platform to perform.

The Cardiff event, which took place on Saturday, featured performances from actor and comedian Richard Newnham and poet Des Mannay.

MaDCaff has been organising similar events across Wales since 2014 and hosted its first event in Cardiff in July.

The pop-up cafe and open-mic night originated in Ceredigion and has now expanded across Wales.

“I’ve been interested in comedy since I was a kid,” said Mr Newnham, of Church Village. “I first got involved in Merthyr in 2015 and the gig went down a treat. It was one of my best.”

“I first became involved with MaDCaff in 2014, after seeing posts on social media,” said Des Mannay, of Newport.

Mr Mannay added that he will be releasing his poetry book next month.

Last year, the event gained funding from Wales Council for Voluntary Action’s Volunteering in Wales grant, allowing seven new groups to be set up across the country.

“It seems that there’s so much choice in Cardiff, so the opportunity to perform wasn’t as big a deal in Cardiff as it might have been in Lampeter,” said Rachel Stelmach, West Wales Regional Officer for Disability Arts Cymru.

“Putting something on in a small place can actually attract more people than putting it on in a big place.”

“I’d been talking with a long-time friend about setting up a network for people in music and dance who are living with some form of mental illness, because there seems to be a lot of them,” Ms Stelmach said.

“There seems to be a very strong link between the creative industries and mental illness, so we thought we’d put something together.”

Ms Stelmach, from Ceredigion applied for funding from mental health charity Time to Change in 2014.

“We realised that with the amount they were offering, we could actually do more than one event, so we set out to do six over the course of a year. We named the event MaDCaff, which stands for Music and Dance,” she added.

The group were able to set up more than six events in their first year due to additional income from selling tea and coffee and borrowing equipment.

MaDCaff won the Epic Award, for the achievements of creative groups, in 2015 which allowed them to gain further funding.

The open mic night is pressure free and, for this reason, does not feature the names of performers on posters.

“We allow anybody who wants to turn up, to turn up, and if they feel ok to perform when they get there, that’s great, they can do that. If they don’t want to, they don’t have too,” said Ms Stelmach.

“Disability Arts Cymru is largely funded by the Arts Council, but they are kind of leaning on all the revenue funded organisations to diversify their income stream” Ms Stelmach added.

“We’re going to have to find other ways of funding what we do, whether we like it or not.”

Cathays, comedy, mental health, poetry, the cardiffian
You may also like